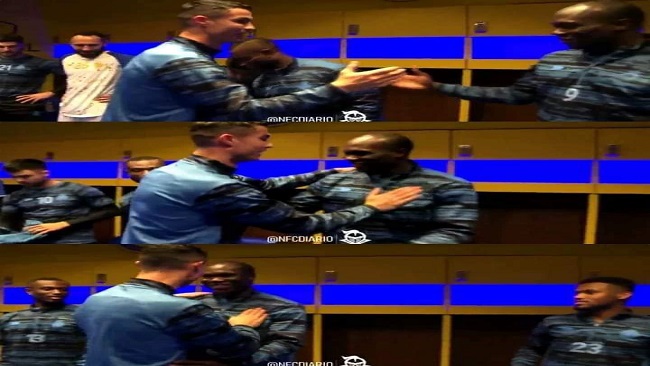 The five times Ballon d’or winner Cristiano Ronaldo departed the shore of Europe and completed a shock move to Saudi Arabia club side Al-Nassr and was officially presented to the excited club supporters in a fully stadium.

After his unveiling, he quickly made his way into the club dressing room and met with his new teammates.

In the dressing room the iconic number seven Cristiano Ronaldo took time to exchange pleasantries with his teammates before he finally began his training session in his new environment.

One of the popular players in the Al-Nassr dressing room is the Cameroon captain Vincent Aboubakar whose fame grew at the just concluded 2022 FIFA world cup tournament in Qatar, the two likewise exchanged pleasantries.

The two will hope to strike up a devastating partnership upfront for Al-Nassr and help them win plenty of trophies both in their league and in the continental competitions.