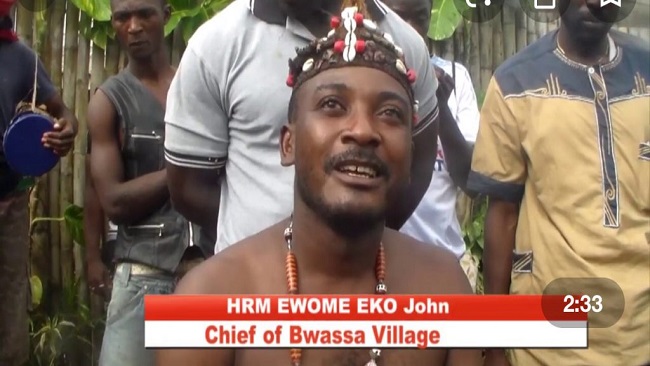 In only one year, Chief Ewume John, member of the Cameroon military, has been identified as a perpetrator of at least seven different acts of torture and other forms of ill-treatment on 11 men in different areas of the English-speaking Southwest Region of Cameroon. The Centre for Human Rights and Democracy in Africa (CHRDA) and the World Organisation Against Torture (OMCT) have documented these acts and intend to refer them to the United Nations Committee against Torture if these cases are not investigated and prosecuted.

Chief Ewume John, also commonly known as Chief Moja Moja, is both a soldier of the Cameroon army and the traditional authority of Bwasa Village in Buea, Southwest Region. The region has been marred by continuous human rights violations in an ongoing conflict between the security forces and a separatist group. Chief Ewume John has used his position to systematically arrest and torture civilians suspected of separatist activities.

On 6 November 2022, Chief Ewume John arbitrarily arrested two men, Kenah Pascal Kum and Zang Emmanuel Buh, members of the Christ Embassy Church, at Bongo Square, Buea, and severely beat them with machetes before handing them over to the National Gendarmerie (Legion) in Buea, capital of the Southwest Region.

Chief Ewume John has a reputation for filming his acts of torture and posting them on social media. He intentionally causes mental suffering and intimidates his victims without fear of prosecution. Despite a complaint filed against him in July 2022 for torture before the military tribunal of Yaoundé, no investigation has been initiated, thus encouraging perpetrators to terrify civilians already exposed to continuous human rights violations.

The OMCT and the CHRDA call on the Cameroonian government to uphold its international obligations and hold the authors of torture accountable for their acts. The two organisations have been mandated by the victims to seize the United Nations Committee against Torture, currently in its 75th session, if they are not provided with reparation and rehabilitation following an independent investigation and prompt prosecution.