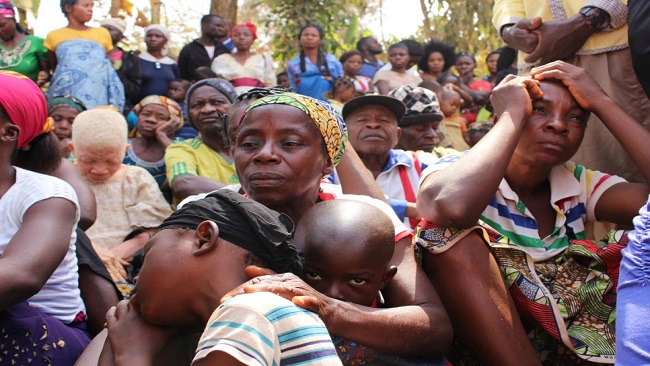 Bullets flew constantly in her hometown. Her two young children haven’t attended school in two years. She abandoned the shop she owns after soldiers arrived and started shooting. One day she saw the corpses of seven of her neighbors.

Now, Pamela Njoke, 38, is among the thousands of people fleeing the English-speaking areas of Cameroon, where separatists are battling to form a new nation and the population is bracing for a surge in violence before a presidential election next month.

“People are dying everywhere,” said Ms. Njoke, who waited four hours recently amid a crush of people seeking space on a packed bus to take her and her children, ages 5 and 9, out of Bamenda, her hometown, to the safety of the capital, Yaoundé.

Fighters who want to form a new country called Ambazonia in the Anglophone area of Cameroon have been locked in bloody battles with the military for months, with accusations of horrific violence on both sides. The fighting has claimed an estimated 400 lives and displaced thousands.

The flood of people out of English-speaking regions may be problematic for President Paul Biya, 85, who is seeking re-election in October. Mr. Biya has been president since 1982 and already is notorious for being one of the continent’s longest-serving leaders.

His administration may have trouble convincing the electorate that the outcome is credible if few people vote in Anglophone areas, which make up a fifth of the population, and if officials who would normally oversee the vote have themselves fled. Government officials in more than a dozen localities there are thought to have abandoned their posts. Cho Ayaba, commander in chief of one group of separatists, said he considered the elections illegal within Anglophone areas.

“I have made it clear that they are banned,” said Mr. Ayaba, who delivers orders from his home abroad. “Any attempt to violate this ban will result in military enforcement,” meaning action from the Ambazonian Defense Forces faction of separatists he leads.

When asked if separatists intended to disrupt elections in Yaoundé, he said, “We have no business with activities within a foreign capital except when they have direct bearings with the security of our people.”

The conflict in Cameroon has steadily worsened in the two years since lawyers and teachers in English-speaking areas began protesting the nation’s Francophone leaders, who dominate the federal government. Those in English-speaking areas have accused the Francophone leaders of sending judges and teachers who do not speak English well to their courts and schools.

Cameroon’s two official languages, French and English, are a remnant of the post-World War I era when the League of Nations appointed France and England as joint trustees of what was then German Kamerun. Colonialists pushed their own cultures on each region.

During his six terms in office, President Biya has concentrated power in favor of French speakers.

The secession movement quickly picked up steam in a population that has increasingly felt marginalized since independence in the 1960s, when a referendum limited options for English-speaking areas to become a separate nation.

Separatists in Anglophone regions have been trying to form a new nation through peaceful channels for decades. The movement turned violent last year in the months after security forces fired on unarmed protesters.

It has spread to involve Cameroonians living abroad who have tried to convince United States lawmakers and United Nations officials that the government was guilty of genocide, a charge the government and many neutral observers deny. Mr. Biya’s supporters point to the English speakers fleeing to the French-speaking capital for safety as evidence.

Last year, the government blocked the internet for months in the English-speaking areas.

The separatists’ pursuit has put them up against a military known for human rights abuses, particularly in areas in the Far North of the country, where soldiers are battling fighters from Boko Haram. Some of the abuses have been broadcast on the internet, and social media posts in general have fueled anger on both sides.

Ambazonian separatists have seized on videos of military abuse filmed in past years during operations against Boko Haram, an entirely separate conflict far away from Anglophone areas, as evidence of why they are fighting the government.

One video shows soldiers shooting to death two women apparently suspected of ties to Boko Haram, along with their two young children. The government initially called the video “fake news,” then later said the soldiers responsible for the killings had been arrested.

In another video released recently, a man’s toes are cut off by what appears to be a soldier. The man is then shot to death.

Old military abuse videos from the Boko Haram battle have been sometimes falsely presented as recent episodes in English-speaking areas. One video of a house fire in the United States, in Colorado, was falsely labeled as showing soldiers burning Anglophone villages.

On the other side, government officials have cited a clip of body parts being stirred in a pot and eaten as evidence of the brutality of separatists. That clip, which circulated several weeks ago, was found to be of actors on the set of a Nollywood movie, not separatists in the bush as the officials had claimed.

Yet videos that misrepresent violence pass as believable because so much horrible violence is real in the Anglophone Northwest and Southwest regions.

In their hunt for fighters, the military has burned numerous villages and shot unarmed protesters. Separatists have been accused of attacking soldiers at checkpoints and of gruesome killings of security forces. Last week Amnesty International said it had authenticated a video showing a man who identified as a separatist alongside the decapitated head of a policeman.

“The situation in the Anglophone regions of Cameroon is becoming increasingly desperate with no one spared from the violence,” Samira Daoud, Amnesty’s deputy regional director for West and Central Africa, said in a recent news release.

About one week ago, soldiers arrived in a village outside Bamenda and opened fire, residents there said. They burned three homes and killed two people, all seemingly at random.

Separatists had blocked the road leading to the village, preventing more soldiers from arriving in armed vehicles and allowing time for villagers to flee. One resident, who did not want his name published for safety reasons, said the actions of separatists most likely saved more civilian lives.

He added that he, like others in the village, now supported the Ambazonians.

Escaping the Anglophone region is not an option for everyone. Blocked roads meant to thwart soldiers also prevent citizens from fleeing.

Some citizens have reported that the government in some areas has begun requiring anyone getting on buses to register their names and those of the person receiving them, outraging civil rights activists.

This month, two dozen public buses were attacked by separatists as they were leaving Anglophone areas. Videos filmed by passengers showed crumpled buses and flames shooting from a bulldozer that apparently had been used to dig a deep ditch to block roads.

The Cameroon Inter-Employer Group, a local organization, reported that the areas affected by the crisis have lost up to $600 million in revenue and nearly 6,500 jobs. These have been mostly in the agriculture sector, including a major palm oil production facility, a large banana plantation and a rubber-making operation.

Separatists have urged shops and schools to close to demonstrate the region’s economic importance to the country. Some people who do not cooperate have been kidnapped, threatened and killed.

Many people just want the violence to end. The scene at a crowded bus station in Yaoundé this week was chaotic as hundreds of tired and anxious people running away from Anglophone areas disembarked with suitcases, backpacks, mattresses and other belongings.

Mama Dora, a fruit seller from English-speaking Bamenda, was waiting at the station to greet friends fleeing the city. Ms. Dora herself had arrived only on Saturday so she could enroll her four children in school. Even if schools were open in her hometown, she would not send her children.

“Let me ask you,” she said. “Can you allow your children to go to school with soldiers all over the place and people being shot dead like chickens?”