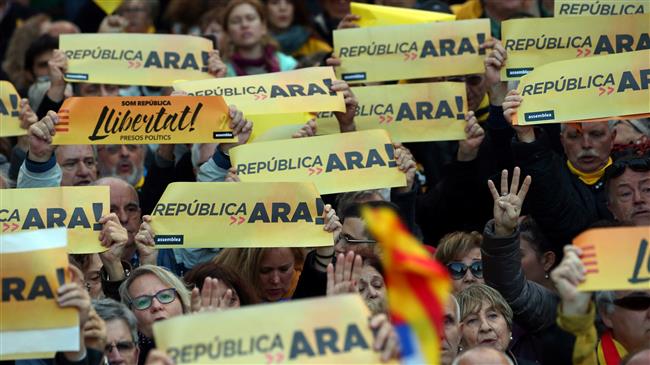 Thousands rally in Catalonia to demand split from Spain 0

Thousands of people have demonstrated in the capital of Spain’s Catalonia region to demand that lawmakers elect a new regional leader and continue working toward total secession from Spain.

An estimated 45,000 demonstrators, holding Catalan flags, rallied in Barcelona on Sunday, according to the city’s urban police. They were holding banners calling for a “republic now!” and chanting “freedom for political prisoners.”

Vice President of the National Assembly of Catalonia (ANC) Agusti Alcoberro said during the rally that what the Spanish state was doing was “outrageous.”

“We mobilized people and on December 21 [2017], we got a majority in the parliament in favor of the Catalan republic,” he said. “What we are doing today is taking to the streets as citizens to demand that the republic that we voted for in October continue forward.”

Catalonia’s pro-independence leaders held a referendum on October 1, 2017, which had been banned by Spain’s central government and declared illegal by the country’s Constitutional Court. Organizers said 90 percent of voters backed secession. Before and during the referendum, Spanish police carried out a heavy crackdown on separatists.

Puigdemont announced earlier this month that he was temporarily withdrawing his bid for presidency and proposed the jailed Catalan independence leader, Jordi Sanchez, to take the job.

The regional parliament was due to vote on the region’s new leader on Monday, but the speaker of the parliament, Roger Torrent, suspended the vote on Friday. He decided to wait for a European Court of Human Rights ruling on whether a jailed leader of Catalonia’s independence movement can be the next president.

Torrent made the decision after Spain’s Supreme Court turned down Sanchez’s request to leave prison and attend the planned session of parliament.

Lawmakers had planned to vote on making him the region’s leader. But Spain’s central government says individuals who face charges and who are unable to be present at the debate and vote in Barcelona can’t be elected by the regional parliament.

Sanchez, the former head of Catalan National Assembly, has been imprisoned near the Spanish capital, Madrid since October over allegations that he and another secessionist figure used a major protest in September to stop Spanish police officers from following a judge’s orders to halt the banned referendum.