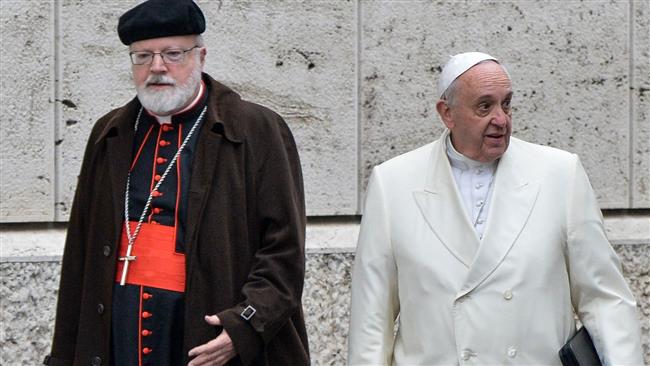 A high-ranking American cardinal has criticized Pope Francis over his recent remarks in Chile, saying the comments had caused “great pain” for victims of sexual abuse.

“It is understandable” that Pope Francis’ comments in Chile on Thursday were “a source of great pain for survivors of sexual abuse by [the] clergy or any other perpetrator,” US Cardinal Sean O’Malley of Boston, who is a top adviser to the pontiff, said in a statement.

O’Malley’s rare criticism of the pope on Saturday came two days after Pope Francis defended a Chilean bishop named Juan Barros, who and has now been accused of protecting a pedophile priest close to him.

“There is not a single piece of evidence against him. It is all slander. Is that clear?,” Pope Francis firmly told reporters in Chile who questioned him about Bishop Barros.

Barros has been accused of protecting his former mentor, Rev. Fernando Karadima, a convicted pedophile.

The Vatican in 2011 found Karadima guilty of abusing teenage boys over many years.

Karadima, however, denies the allegations, and Barros has sided with him.

The enigmatic Barros-Karadima link has for years fascinated people not only in Chile but also in neighboring Argentina, where Pope Francis hails from.

O’Malley’s statement further said, “Words that convey the message ‘if you cannot prove your claims, then you will not be believed’ abandon those who have suffered reprehensible criminal violations of their human dignity and relegate survivors to discredited exile.”

O’Malley headed a papal commission — the Pontifical Commission for the Protection of Minors — that advised the pontiff on how to root out sexual abuse in the Church. The commission’s three-year term ended last month, and its future is not clear.

O’Malley admitted, however, that the Pope “fully recognizes the egregious failures of the Church and its clergy who abused children and the devastating impact those crimes have had on survivors and their loved ones.” He said he could not “address why the Holy Father chose the particular words he used at that time.”

While the Pope has vowed “zero tolerance” for sexual abuse, his efforts have sputtered.

A plan to open a tribunal in the Vatican to judge bishops accused of covering up sexual abuse or mishandling cases never saw the light of day.

The much-touted commission headed by O’Malley was hit by two high-profile defections of lay members who had been victims of abuse.