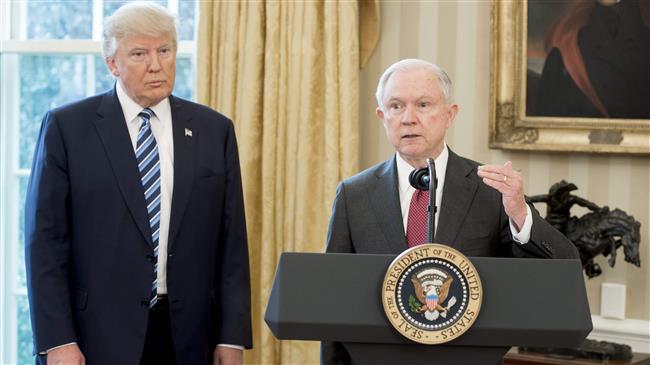 US President Donald Trump has taken yet another swipe at his Attorney General Jeff Sessions, who heads the powerful Justice Department, for not blocking two damaging investigations that undermined two Republican candidates ahead of the mid-term congressional elections.

On August 8, Representative Christopher Collins, who was the first member of Congress to endorse Donald Trump for president, was indicted for alleged insider trading, wire fraud, conspiracy and lying to the FBI.

According to the indictment, the New York lawmaker was allegedly involved to a scheme to gain insider information about Innate Immunotherapeutics Limited, a biotechnology company headquartered in Sydney, Australia.

His son, Cameron Collins, and the father of his son’s fiancée, Stephen Zarsky, were also arrested on the same charges. Two weeks later, Representative Duncan Hunter and his wife were indicted by a federal grand jury for spending some $250,000 of campaign funds for family vacations and other personal expenses over a period of seven years.

Just like Collins, the San Diego Republican has remained defiant in face of the charges, accusing prosecutors of having political motives. Both Collins and Hunter are campaigning for re-election in November.

The Trump team is worried that the indictments would help Democrats to score a decisive victory in the House of Representatives and launch their much-anticipated attempt to impeach the Republican president.

This is not the first time that Trump is lashing out at Sessions. The president has regularly taken jabs at Sessions for recusing himself from overseeing a high-profile probe into the Trump campaign’s ties with Russia, which allowed DOJ’s Special Counsel Robert Mueller to dig deep into in the hope of finding any hints of a possible “collusion.”

In late August, Sessions finally hit back at his boss, saying he will not allow political pressure to influence the work being done at the department.