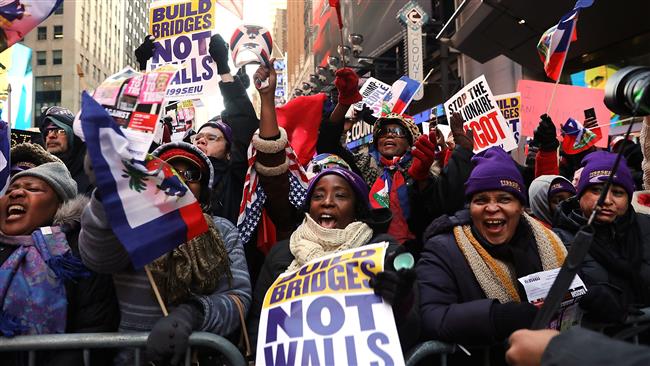 Protesters across the United States have staged more anti-racism rallies in response to President Donald Trump’s offensive remarks about immigrants, whom he reportedly berated of coming from “sh*thole countries” like Haiti and South Africa.

In Palm Beach, Florida, Haitian activists showed up in large numbers at the Southern Boulevard bridge on Monday to confront Trump as his motorcade passed through the streets after leaving his luxurious Mar-a-Lago resort for the airport.

“What brings us out today is the statement he made,” said Charlemagne Metayer, a Haitian-born American citizen who moved to the US in 1985.

“Some of us work two or three jobs to make a living,” said Metayer, a father of four. “We are hard working people. We deserve an apology from the president.”

Trump’s supporters tried to counter the protest by gathering on the side of the street. There was heavy police presence at the scene to prevent violent clashes.

On Thursday, Senator Dick Durbin and several other Democratic lawmakers who had attended a White House meeting on immigration maintained that the president used disparaging remarks to refer to a number of nations during the bipartisan session.

The meeting was about reaching a deal over Trump’s border wall with Mexico in exchange for saving DACA, a program that protected some 800,000 child immigrants.

Before leaving Mar-A-Lago, Trump wrote in a tweet that his comments were “totally misrepresented” by the Democrats.

The explanations, however, were not enough to stop protests in his hometown of New York City, as angry protesters packed into Judson Memorial Church, near Washington Square Park, to protest his policies.

The protesters expressed solidarity with immigrants who have been torn away from their families by Trump administration’s anti-immigration agencies.

There were also similar events in several other cities, including Oakland, California.

Ironically, the protests came after Trump marked Martin Luther King Jr. Day by asking Americans to observe the holiday with acts of civic work and community service while he himself broke with the presidential tradition and spent the whole day at Mar-a-Lago.