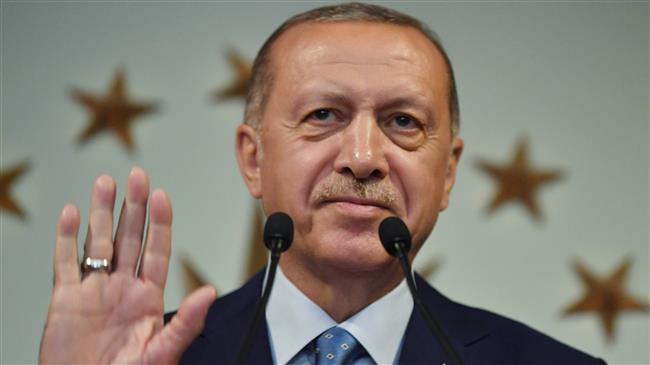 Turkey: Erdogan and his party win presidential and parliamentary elections 0

Recep Tayyip Erdogan and his ruling Justice and Development (AK) Party have claimed victory in Turkey’s presidential and parliamentary elections.

“Our people have given us the job of carrying out the presidential and executive posts,” said Erdogan in a speech from Istanbul on early on Monday.

“I hope nobody will try to cast a shadow on the results and harm democracy in order to hide their own failure,” he added.

The country’s main opposition party initially said that Erdogan would fall well short of a first-round victory, but after the results were announced that it would carry on its democratic struggle “whatever the result.”

With 99 percent of votes counted in the presidential race, Erdogan had 52.5 percent.

Polls across the country of 81 million people officially closed at 5 pm (1400 GMT). There are no exit polls in Turkey and initial results are expected during the early evening.

Votes were cast in 180,065 polling places across the country.

Votes by Turks living abroad who cast their ballots in 60 countries at 123 embassies and consulates will be counted at the same time in the capital Ankara.

Erdogan called the snap elections, bringing forward a vote that was expected to be held in November 2019.

Six candidates were vying for the Turkish presidency. If a candidate wins just over 50 percent of the vote, he will win the presidency, but if not, there will be a runoff on July 8.

In April 2017, 51 percent of Turkish voters endorsed constitutional changes backed by Erdogan, which grant new executive powers to the president and scrap the post of prime minister.

Supporters of the reforms argue that they will modernize the country, but opponents fear a possible authoritarian rule.

The constitutional overhaul would mean that Erdogan could stay in power for another two terms until 2029.
Source: Presstv