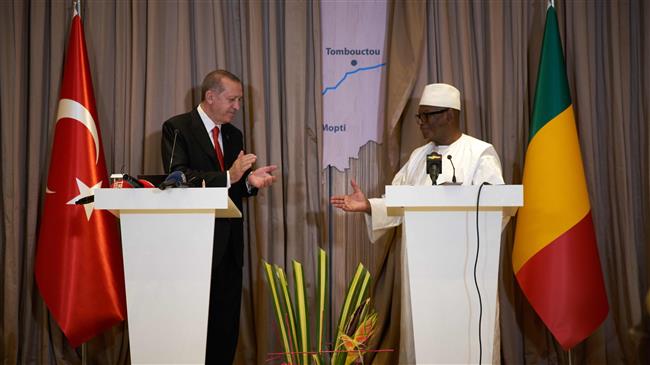 Ankara has been seeking to expand its influence in Africa in the face of tensions with Egypt, where calls are growing for a public boycott of Turkish goods.

Turkish President Recep Tayyip Erdogan described Sisi’s rise to power as a “coup” an accused the UN of having done “nothing but watch the events such as overthrowing the elected president in Egypt.”

Recently, Erdogan wrapped up a five-day tour of the African countries of Algeria, Mauritania, Senegal and Mali with a large business delegation and a diplomatic entourage.

“We want to walk with Africa while a new world order is being established,” he tweeted at the end of his trip.

This is while a public boycott of Turkish goods has been launched in Egypt to protest what its leaders call  Erdogan’s “anti-Egyptian policies.”

Social media users called on the Egyptian government to take action against businessmen importing products from Turkey, saying that purchase of Turkish goods would “contribute to the killing of Egyptians.”

“Turkey acts against Egypt’s political interests everywhere,” said Hisham Baker, a legal expert who initiated the boycott campaign with his friends. “This is why Egyptians have a national and moral obligation to stop buying its products.”

Turkey and Egypt have also been at odds over the latter’s maritime demarcation deal with Cyprus in a potential struggle over resources in the gas-rich eastern Mediterranean.

Additionally, Cairo is concerned about Turkey’s close economic and military ties with Sudan.

Relations between Egypt and Sudan have been soured in recent months by disputes over the ownership of the “Halayeb Triangle” border territory, and over the broader issue of use of water from the River Nile that passes through their territories.

The triangle lies between Egypt and its southern neighbor and the borders have been contested by Sudan since 1958. Cairo says it is Egyptian territory.