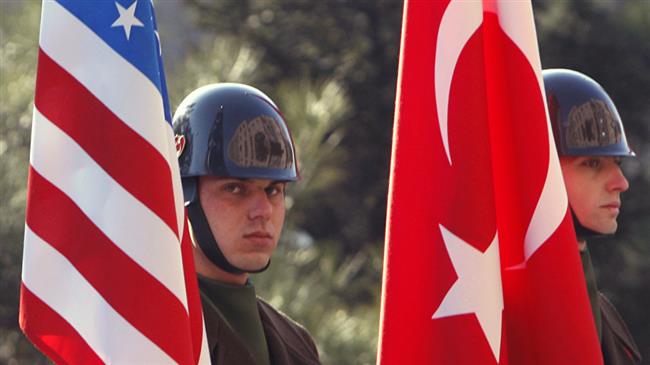 Turkey urges nations to form united front against US 0

Turkey has called on world nations to form a united front against the US which has imposed sanctions on Ankara, a close ally of Washington in the Middle East.

Turkish Treasury and Finance Minister Berat Albayrak said US President Donald Trump is using sanctions and tariffs to sabotage the economy of other countries.

“It is clearly in the interest of most countries to cooperate in resisting unilateral economic decisions by powerful actors that are motivated by narrowly defined national interests,” he wrote in an article published on the Foreign Policy magazine.

“By acting together with Turkey now, other countries can also help it create a common strategy to avoid artificial crises in the future,” read the article titled America Can’t Be Trusted to Run the Global Economy.

The US has imposed sanctions on two Turkish ministers and doubled steel and aluminum tariffs, which have led to a sharp decline in Turkey’s currency.

Washington took the punitive measures in protest at Ankara’s detention of American Pastor Andrew Brunson, who has been accused of having links with terror organizations in Turkey.

The lira has fallen more than 40 percent against the dollar this year, driving up the cost of food and fuel and sending inflation soaring to 18 percent, its highest in a decade and a half.

To put a floor under the lire, the government ordered exporters last week to convert 80 percent of their foreign exchange revenue into lira. Turkey’s exports totaled $157 billion last year, according to official data.

In his article, Albayrak said the chaos which has afflicted financial markets has nothing to do with economic fundamentals, adding the turmoil has been driven by Washington.

Last week, Turkish President Recep Tayyip Erdogan lashed out at the US for behaving like “wild wolves,” saying Ankara would pursue non-dollar transactions in trade with Russia, Iran and other countries.

Governor of the Central Bank of Iran said on Saturday the Islamic Republic, Russia, and Turkey had agreed on a number of economic measures like removing the US dollar from their mutual transactions.

The agreement was made on the sidelines of a key trilateral summit on Syria held in Tehran on Friday and attended by Iranian, Russian and Turkish presidents.

Last month, Russia’s Deputy Foreign Minister Sergei Ryabkov said Moscow was stepping up efforts to abandon the US currency in its transactions with other countries.

“The time has come when we need to go from words to actions and get rid of the dollar as a means of mutual settlements and look for other alternatives,” Ryabkov said.

Like Iran and Turkey, Russia has been slapped with sanctions by the United States, prompting retaliatory measures by Moscow.

Leader of the Islamic Revolution Ayatollah Seyyed Ali Khamenei told President Vladimir Putin on Friday that US sanctions against Russia, Iran and Turkey create a strong common ground for expanding cooperation, including trade without using the US dollar.

The Russian president said the Americans are making a “major strategic error” by restricting financial transactions for short-term political gains as this will eventually diminish trust in the dollar and weaken the currency.