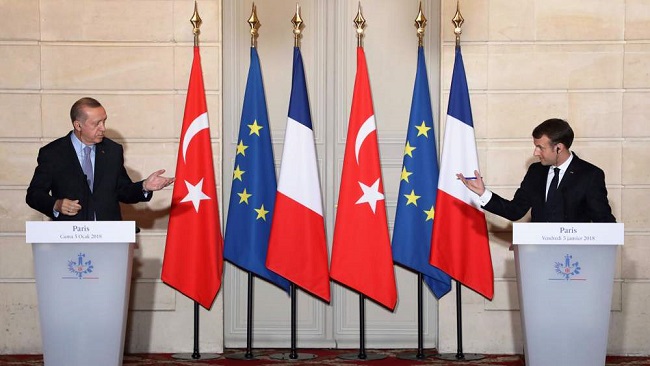 Turkish President Recep Tayyip Erdogan says he hopes France will “get rid of” President Emmanuel Macron in the shortest possible time, in his harshest remark against the French leader yet.

“Macron is a burden on France. Macron and France are going through a very dangerous period actually. My hope is that France gets rid of the Macron trouble as soon as possible,” Erdogan told reporters in Istanbul on Friday.

Turkey and France have been at odds over a range of issues, including Ankara’s dispute with Greece over sea boundaries in the eastern Mediterranean.

France has backed Athens in the maritime dispute, taking part in joint war games with Greece and Cyprus amid conflicting Greco-Turkish claims to territory in the sea believed to be rich in oil and natural gas.

Ties between the two NATO allies have also deteriorated over conflicting policies in Syria and Libya, even though they have backed and supplied militants in the two war-ravaged Arab countries.

Ankara and Paris have also traded barbs over their roles in the recent Nagorno-Karabkah conflict.

But Erdogan has grown specially bitter toward Macron over the French president’s defense of the publication of offensive caricatures of Prophet Muhammad (PBUH) by a French satirical magazine.

Anger grew across the Muslim world after Macron publicly attacked Islam in defense of the publication of the derogatory cartoons.

In early October, Macron said he would not “renounce the caricatures.” He instead described Islam as a religion “in crisis” and declared war on “Islamist separatism,” which he claimed was taking over France’s estimated six-million-strong Muslim population.

His remarks sparked sharp criticism from Muslim leaders and activists from around the world, including Erdogan, who described Macron’s posture as an “open provocation.”