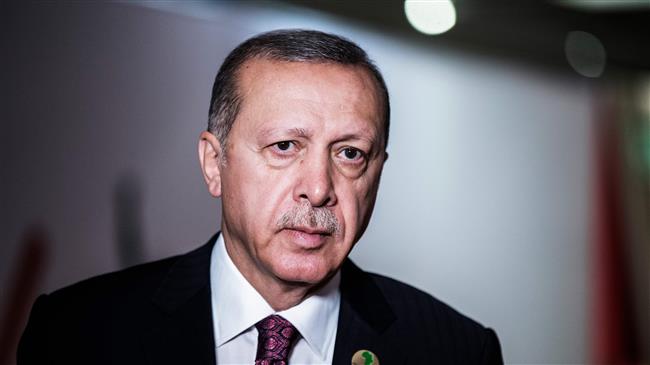 Turkish President Recep Tayyip Erdogan has said the lira’s drop is a “political plot” against Ankara, and his country will begin to seek for new partners.

The lira’s crash was sparked by a disagreement with the United States over the detention of an American pastor in Turkey, which has even brought up questions over the future partnership between Washington and Ankara.

Turkey’s currency dropped some 16 percent to new record lows against the dollar on Friday.

“The aim of the operation is to make Turkey surrender in all areas, from finance to politics,” said Erdogan on Sunday.

“We are once again facing a political, underhand plot. With God’s permission we will overcome this,” he added.

Erdogan noted that his country would turn to other partners if this “economic war” goes on.

“Some close the doors and some others open new ones,” he added.

He further added that the only response to a country which chooses to sacrifices its strategic partnership and a half century alliance with a state with a population 81 million for the sake “terror groups” is “good-bye.”

“You dare to sacrifice 81-million Turkey for a priest who is linked to terror groups?,” he stressed.

Relations between the two NATO allies have taken a turn for the worse amid dispute over the detention in Turkey of US evangelical pastor Andrew Brunson on terrorism charges.

“They tell us to release the priest by Wednesday 6:00 pm, otherwise the sanctions will begin,” Erdogan added.

On Friday, US President Donald Trump announced to double steel and aluminum tariffs on Turkey, saying relations between Washington and Ankara “not good” as tensions mount between the two countries.

“I have just authorized a doubling of Tariffs on Steel and Aluminum with respect to Turkey as their currency, the Turkish Lira, slides rapidly downward against our very strong Dollar!” Trump said on Twitter.

“Aluminum will now be 20 percent and Steel 50 percent. Our relations with Turkey are not good at this time!” he added.

The United States is the world’s biggest steel importer. Washington slapped tariffs of 25 percent on steel and 10 percent on aluminum in March for imports from several countries, including Turkey.

Trump’s announcement came shortly after President Erdogan called on Turks to help defend the country against the US-launched economic war against his nation. Erdogan appealed to Turks to exchange dollars and gold for Turkish lira to support the plunging currency.

Ankara and Washington also disagree over their military interventions in the Syria war, Turkey’s plan to buy missile defense systems from Russia and the US conviction of a Turkish state bank executive on sanctions-busting charges in January.

On Saturday, Erdogan warned his country’s partnership with the United States might be in “jeopardy” as tensions intensify between the two NATO allies.