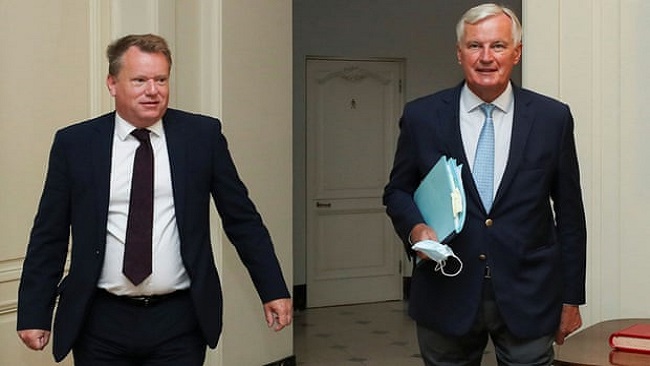 A historic deal on the UK’s future trading and security relationship with the European Union has been struck on Christmas Eve, a week before the end of the Brexit transition period.

As the country leaves the single market and customs union on 31 December, new arrangements allowing for tariff-free trade in goods and close police and judicial cooperation will come into force.

The announcement followed a final call between Boris Johnson in Downing Street and the European commission president, Ursula von der Leyen, in her Berlaymont headquarters in Brussels – at least the fifth such telephone conversation over the last 24 hours.

The trade agreement – running to 2,000 pages – is unprecedented in scope, containing provisions on subjects varying from civil nuclear cooperation and energy interconnections to fishing and aviation.

A No.10 spokesman said: “The Deal is done. Everything that the British public was promised during the 2016 referendum and in the general election last year is delivered by this deal.

“We have taken back control of our money, borders, laws, trade and our fishing waters. The deal is fantastic news for families and businesses in every part of the UK. We have signed the first free trade agreement based on zero tariffs and zero quotas that has ever been achieved.”

Von der Leyen was more sombre in her comments at a press conference in Brussels.

“At the end of a successful negotiation I normally feel joy. But today I only feel quiet satisfaction and frankly speaking relief,” she said. “I know this is a difficult day for some and to our friends in the United Kingdom, I want to say parting is such sweet sorrow but to use the line from TS Elliot, what we call the beginning is often the end. And to make an end is often a beginning. So to all Europeans I think it is time to leave Brexit behind.”

The deal guarantees “zero tariff and zero quota” trade on goods worth £668bn in 2019. But it will also mean significant costs to businesses as exporters face a host of border checks from 1 January and its ends freedom of movement for most UK nationals.

The Downing Street spokesman said, however, that the agreement would guarantee that the UK was “no longer in the lunar pull of the EU, we are not bound by EU rules, there is no role for the European Court of Justice and all of our key red lines about returning sovereignty have been achieved”.

The statement went on: “It means that we will have full political and economic independence on 1st January 2021. A points-based immigration system will put us in full control of who enters the UK and free movement will end

“We have delivered this great deal for the entire United Kingdom in record time, and under extremely challenging conditions, which protects the integrity of our internal market and Northern Ireland’s place within it.

“We have got Brexit done and we can now take full advantage of the fantastic opportunities available to us as an independent trading nation, striking trade deals with other partners around the world.”

The prime minister told his cabinet late on Wednesday night that the deal respected the sovereignty of both sides, as he urged senior figures to help him sell it.

On Wednesday, the Brexiter European Research Group of Conservative MPs said it would ask a self-styled “star chamber” of lawyers to scrutinise the terms before giving its support.

The agreement avoids a no-deal exit that the Office for Budget Responsibility had warned would reduce Britain’s economic output by £40bn in 2021 and cost more than 300,000 jobs.

The UK left the EU on 31 January but has benefited from continued membership of the single market and customs union over the last year, with British citizens retaining the right to freedom of movement around the bloc.

The end of the transition period will bring widespread changes for British businesses and citizens, as a new chapter in the country’s relationship with its neighbours begins.

Businesses will face extra paperwork and costs when trading with the UK’s biggest export market. Freedom of movement for most UK nationals will end, with restrictions imposed on stays in EU member states. As a “third country” to the EU, coronavirus travel restrictions could be imposed on UK nationals as of 1 January.

The agreement will nevertheless be a matter of huge relief to millions of people on both sides, four and a half years since the UK decided to leave the EU in June 2016. The negotiations, staged in Brussels and London, had weaved precariously through a pandemic, appearing doomed to failure at several points.

Only two weeks ago, Johnson told the cabinet to prepare for a no-deal exit, warning the public that such an eventuality was “very, very likely”.

The sticking points at the end of the talks had been on EU access to British fishing waters and Brussels’ demand for rules that would ensure neither side could gain a competitive advantage in trade as their rulebook diverged over time.

In the final days, it had been future EU access and quotas in British fishing waters, an issue of small economic impact but high political salience for both sides, that was the difference between a deal and a breakdown in talks.

The EU had offered a six-year transition period for phasing in a 25% reduction in the catch by value taken by European fleets in British waters, with access guaranteed to a six to 12 nautical mile zone from the British coastline.

Downing Street had tabled a counter-proposal of a three-year transition period with a 60% reduction – and no access to the nautical zone.

The compromise involves a transition period of five and a half years to phase in the changes, according to sources, with the UK accepting a 25% repatriation of quotas. But Downing Street has knocked back attempts by the EU to establish a mechanism under which changes to the quotas in the future could lead to tariffs on British exports. The issue had been key to No 10’s claims to have taken back control of British waters.

Following the announcement of a deal, the European commission sent the draft treaty to the member states. Should the 27 capitals be content with the deal, ministers on the council of the EU will agree on provisional application of the agreement on 1 January.

EU ambassadors were due to meet on Thurday morning to take the first step. The European parliament declined to stage a vote of consent this year given the lack of time for scrutiny. MEPs will have their say later next month.