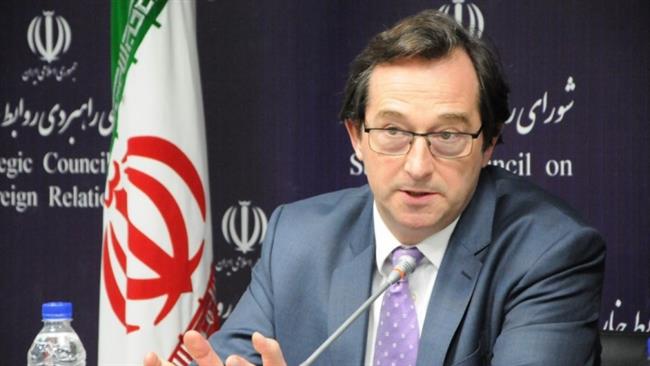 UK says Iran’s domestic affairs ‘none of our business’ 0

The United Kingdom’s ambassador to Iran says the Islamic Republic’s domestic affairs, including recent riots, are none of his country’s business and that the UK will stay out of Iranian internal affairs.

Ambassador Nicholas Hopton made the remarks in a gathering titled “Europe and the Geopolitical Affairs of West Asia,” which was being hosted by Iranian think tank the Strategic Council on Foreign Relations on Tuesday evening.

Some two weeks ago, some peaceful protests were held in Iranian cities against price hikes and the overall economic condition of the country. Limited numbers of violent individuals, some of them armed, later sought to turn the peaceful protests into street riots. However, the original protesters soon heeded calls by authorities to leave the streets so that their legitimate activities would not play into the hands of violent rioters.

While sporadic violence continued for several days — and claimed the lives of over a dozen people — the riots gradually ended.

In the course of those events, some British media outlets provided controversial coverage of the developments.

Hopton sought to distance the British government away from such coverage. He said the British media made their own editorial decisions and the UK government “exercised no control” over them.

He did express concern about some of the coverage of the events in Iran by the media in his country, however.

“The position held by the British government is that Iran’s domestic affairs are the concern of the country [itself]. The Iranian people should decide for themselves and freedom of expression and the freedom to express protest are the rights of the people,” he said.

“What the protesters seek is none of our and the British government’s business, and the UK government will not interfere,” he stressed.

Last Thursday, it was reported that Iran’s Embassy in London had submitted a letter of complaint to the British media regulator Ofcom, denouncing the propaganda campaign launched by UK-based Persian-language broadcasters covering the riots.

The letter, the source said, pointed out that the outlets had acted in clear contravention of the British and international media regulations by trying to incite the protesters in Iran to resort to riots and armed violence.

Elsewhere in his remarks, Hopton said London was “fully” committed to a 2015 nuclear deal between Iran and six other countries on the Iranian nuclear program.

The agreement removed nuclear-related sanctions against Tehran, which, in turn, applied certain limits to its nuclear energy program.

The British ambassador pointed to the likelihood that the United States may unilaterally withdraw from the deal and said he hoped US President Donald Trump would make the right decision.

Trump faces a Friday deadline to announce whether he would certify Iranian compliance with the deal under domestic US law. He has once certified that compliance but decertified it another time. He sees the deal as a legacy of his predecessor — former president Barack Obama — that he should undo.

The United Nations and every other party to the deal have warned Washington against trying to harm the deal, calling it a triumph for diplomacy and a contributing factor to regional and international peace and security.