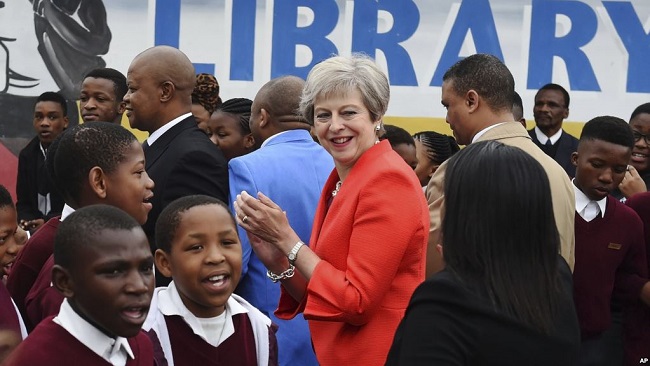 British Prime Minister Theresa May pledged Tuesday to make Britain the biggest investor in Africa from the developed world, as she began a three-nation tour of the continent.

With Britain due to leave the European Union in March 2019, May is seeking to bolster Britain’s ties with other regions around the world, notably Africa. As part of that strategy, May is visiting three of Africa’s largest economies — South Africa, Nigeria and Kenya — along with her trade minister and a delegation of 29 business leaders.

“I am committed to Africa and committed to using every lever of the British government to support the partnerships and ideas that will bring benefits for generations to come,” May said in a rainy Cape Town at the start of her tour that is being promoted under the slogan “U.K.-Africa: Partners For Opportunity.”

May has high ambition, envisioning Britain becoming the biggest investor in Africa from the world’s major industrial economies — the Group of Seven that also includes the United States, Canada, France, Germany, Italy and Japan. Only China would be ahead of Britain.

“By 2022, I want the U.K. to be the G-7’s number one investor in Africa, with Britain’s private sector companies taking the lead in investing the billions that will see Africa’s economies grow by trillions,” said May.

“The U.K. has for some time supported land reform in South Africa that will be a legal, transparent and democratic process,” said May.

She said that from previous comments from Ramaphosa, she is convinced it will not be a “smash and grab” process but one responsibly designed to encourage economic growth. May’s support for Ramaphosa’s plans for land redistribution is dramatically different from U.S. President Donald Trump, who last week was critical of the policies in a tweet.

Before speaking, May visited the I.D. Mkhize High School in Gugulethu township where she met with students.

May’s trip is the first working visit by a British leader to South Africa since 2011.