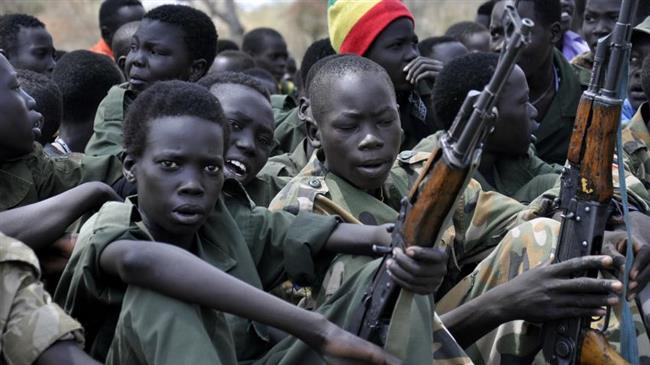 The United Nations says over 300 child soldiers have been released by armed groups in war-ravaged South Sudan under a scheme to help reintegrate them into society.

According to the United Nations Mission in South Sudan (UNMISS), at least 311 children, 87 of them girls, were released by armed groups on Wednesday in Yambio, which is located in the south of the country.

David Shearer, the UN secretary general’s special representative and head of UNMISS, said in a statement that the children would soon begin reintegrating into their communities and learning new skills to support themselves. “This is the first time so many young women have been involved in a release like this in South Sudan,” the statement read.

“They will have endured suffering, including sexual abuse. It is vital that they receive the support they need to rejoin their communities and that they are welcomed home by family and friends without any sense of stigma.”

“Children should not be carrying guns and killing each other. They should be playing, learning, having fun with friends, protected and cherished by the adults around them,” Shearer said.

The integration program in Yambio is aimed at helping 700 child soldiers return to normal life. Of these, 563 are part of President Salva Kiir’s force and 137 are with rebels.

The UN peacekeeping force, acting in unison with the UN children’s agency UNICEF, is negotiating the release of child soldiers in other regions of the country.

“This is a crucial step in achieving our ultimate goal of having all of the thousands of children still in the ranks of armed groups reunited with their families,” said Mahimbo Mdoe, UNICEF’s Representative in South Sudan. “It is the largest release of children in nearly three years and it is vital that negotiations continue so there are many more days like this.”

Civil war broke out in South Sudan in December 2013, just two years after the country became independent, when disagreements between President Kiir and then Vice President Riek Machar turned into an armed conflict between their loyalists. While fighting generally subsided early last year, clashes once again intensified in July 2016.

Tens of thousands of people have died and more than four million people have been driven from their homes, while millions of others are suffering from hunger in a humanitarian crisis expected to worsen as the lean season sets in.

The UN and international rights groups have on numerous occasions accused both Machar’s loyalists and government troops of committing atrocities during their military operations.