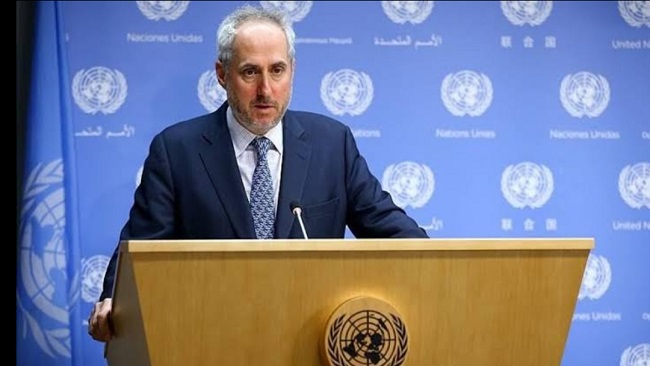 The United Nations has “strongly and unequivocally” condemned reported cases of “serious human rights violations and abuses” in Cameroon.

“On Cameroon, we have seen recent reports of serious human rights violations and abuses in that country.

“These include a shocking video allegedly showing the brutal murder of a young woman in Muyuka in the South-West.

“We strongly and unequivocally condemn this atrocious act of violence.

“We call on the authorities to swiftly launch an investigation into these allegations and to ensure that those responsible are brought to justice,’’ Dujarric said.

The Northwest and Southwest regions of Cameroon have seen armed confrontations between security forces and Anglophone separatists, since 2017.

On Feb. 14, no fewer than 23 civilians, including 15 children and two pregnant women were massacred in the north-western village of Ngarbuh.

Three Cameroonian soldiers were arrested and charged with murder in connection to the incident, following an investigation ordered by President Paul Biya.

Dujarric reiterated the UN’s call on armed actors to refrain from attacks against civilians and to respect international humanitarian and human rights law.

He also urged all sides to join the Secretary-General’s call for a global ceasefire as the world fights the COVID-19 pandemic.

“We reiterate the readiness of the UN to work with all stakeholders towards a political solution to the crisis in the North-West and South-West of Cameroon through meaningful dialogue,’’ he added