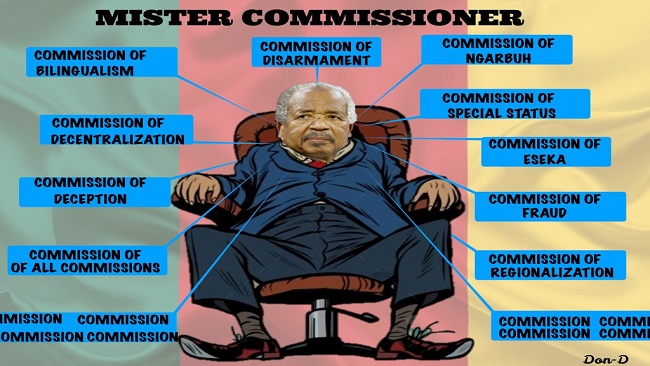 A criminal investigation will be opened against presumed authors of financial malpractices within the framework of the management of Covid-19.

French Cameroun dictator President Biya has ordered a major judicial enquiry against some members of his ruling CPDM crime syndicate and their accomplices of fraud in the management of the Covid-19 pandemic fund.

Cameroon Intelligence Report gathered that the instruction from the 88-year-old Head of State follows a report by the Audit Chamber of the Supreme Court on the management of funds allocated to the management of the coronavirus by the International Monetary Fund.

CIR reported earlier that the IMF set as a condition for the granting of the second installment of the Covid-19 loan to Cameroon, transparency and commitment to issuing semi-annual reports on COVID-19 spending; commission an independent audit; and publish “documents related to results of public procurement and [beneficial ownership information] of companies awarded contracts.”

An in-depth analysis of Cameroon found mixed results in meeting the IMF’s transparency commitments. There remained inconsistencies in the types of measures to which the corrupt regime in Yaoundé committed its implementation, and the role of the IMF in ensuring compliance. The transparency commitments in the emergency loans spurred the Biya government to produce information about its spending and contracts that it would have otherwise not published. However, the amount, accessibility, and quality of the disclosed information varied widely and was inadequate for meaningful oversight for La Republique du Cameroun.

Cameroon has published almost no information on its Covid-19 expenditures mindful of the fact that since March 2020, the IMF has provided approximately US$108 billion in financial assistance to 85 countries to support their efforts to combat the pandemic.

The IMF demanded transparency commitments. But Biya and his gang changed the rules of public procurement. It is evidently clear that most of the corruption will be put on the head of the late Minister and Lamido of Garoua Alim Hayatou as dead men tell no tales.

So what is behind the Biya-Laurent Esso action?

In practice, however, the Biya regime never uploaded this information into a central database. Instead, it produced a list of the names of companies awarded contracts, beneficial owners, and the contract amount, but there are no links to that document on any government website. The only link appears to be on page 47 of an IMF loan agreement. In addition, for nearly all companies, only one beneficial owner is listed, making it highly unlikely that the information is complete.

The IMF feels that Biya and his acolytes are playing a dangerous political game at a time when many people are dying from Covid-19 in Cameroon. The International Monetary Fund believes that it was not the Superior State Control (CONSUPE) that should audit the management of its money because it is an institution that it considers political.

In his war against Prime Minister Dion Ngute and the Minister of Public Health Manaouda Malachie, Ferdinand Ngoh Ngoh, the Minister-Secretary General at the Presidency of the Republic is trying to short-circuit the recommendations of the IMF to have the audit carried out by the CONSUPE which he controls. Thus in a letter with the subject: “Special audit mission of funds related to the fight against Covid-19” addressed on December 15, 2020 to the Minister of Finance, Ferdinand Ngoh Ngoh wrote: “I have the honour to ask you to release and make available to the Minister Delegate at the Presidency of the Republic in charge of the Superior State Control, an allocation of 32 555 000 (thirty-two million five hundred and fifty-five thousand”

Dion Ngute is not happy with the current situation and was heard murmuring privately that this was a new twist from Ngoh Ngoh whom he often describes as a ‘bandit’.

President Biya weighed in and ordered that CONSUPE should limit itself to the Ministry of Health and the audit chamber would examine all the accounts of the various departments involved in the fight against COVID 19.

The situation is even more urgent as the Minister of Finance, Louis Paul Motaze, has gone ahead negotiated and obtained a new agreement with the IMF. But the IMF is aware that the report of the Audit Office revealed a major financial scandal and the financial body is mounting pressure on the regime in Yaoundé.

Paul Biya has now decided to open a criminal investigation. He has instructed his Secretary General to handover the Covid-19 IMF file to the Minister of State, Justice and Keeper of the Seal, Laurent Esso.

CIR is keeping a watchful eye on this developing scandal in La Republique du Cameroun.

By Rita Akana In Yaounde