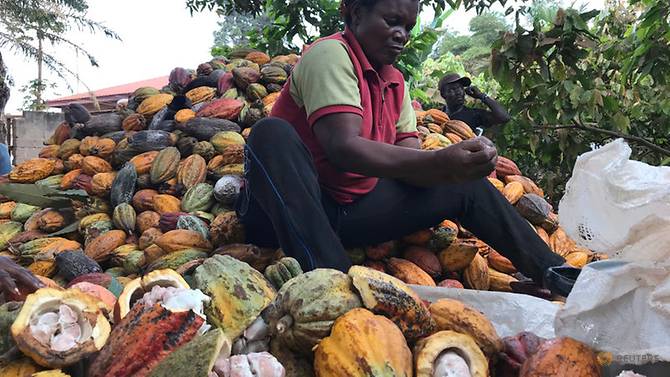 Cameroon has been gripped by spiralling violence since November 2016, when government forces crushed a peaceful movement of Anglophone teachers and lawyers protesting against their perceived marginalisation by the French-speaking majority.

Violent clashes between separatists and security forces have cut many Cameroonian buyers off from parts of the Southwest region, source of roughly half of Cameroon’s total production which reached around 240,000 tonnes last season.

“Our usual buyers are scared. Some come, but they stop in towns like Mamfe and do not dare to venture further into villages that produce more cocoa,” said Takor, a cocoa farmer in Mamfe, who did not give his surname out of fear of retribution.

“Now we have buyers that come from Nigeria,” he said.

A Reuters reporter in the south-western town of Ekok saw bags of cocoa beans loaded on to pick-up trucks and into cars registered in Nigeria’s Cross River State.

Cocoa smuggling has long been an issue along the border. But Cameroonian farmers and buyers told Reuters that the crisis has aggravated the practice.

Smugglers, they said, are now paying higher prices for beans and venturing deeper into Cameroon, the world’s fifth biggest producer, to scoop up more of farmers’ output.

One farmer in the south-western village of Eyang Ntui said Nigerians paid between 850 and 1,000 CFA francs (£1.1-£1.3) per kilogram of beans. Cameroonian buyers were, meanwhile, paying around 600 CFA francs/kg, he said.

“The crisis has brought us closer together. It is easier to sell to the Nigerians who are near us,” said Mbeng, who farms 12 hectares of cocoa near Mamfe and also withheld his surname.

No estimate was available for the smuggled volumes, but Cameroonian farmers and buyers said the amounts were significant.

Farmer Georges Eyong said his cooperative had sold 53 tonnes of beans to Nigerian buyers this month.

A senior official with Cameroon’s sector regulator, the National Office for Cocoa and Coffee (ONCC), said it plans to curb cocoa smuggling by setting up check points along the Nigerian border.

“This is an illegal trade. We are not opposed to exporting Cameroonian cocoa, but exporters need to meet all the necessary terms and conditions,” said the official, who asked not to be named as he was not authorised to speak to the press.