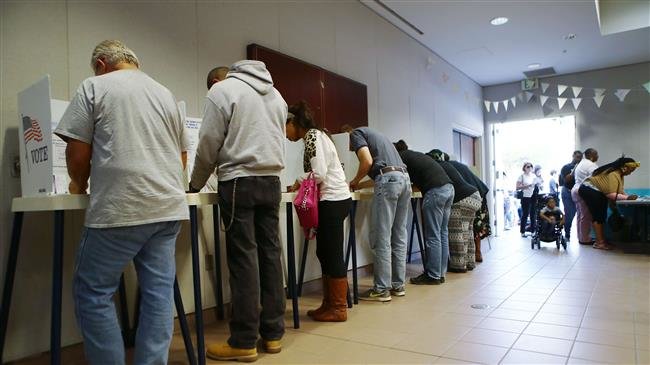 More than 30 million Americans have cast early ballots ahead of Tuesday’s midterm elections, eclipsing the 2014 early totals nationally and suggesting a high overall turnout for contests that could define the final two years of President Donald Trump’s term.

At least 28 states have surpassed their 2014 early votes. And perhaps even more indicative of the unusual enthusiasm this midterm cycle, some states are approaching their early turnout from the 2016 presidential election.

Here’s a look at some highlights:

The 30.6 million ballots includes data from 48 states, with several of those still collecting absentee ballots and welcoming in-person early voters. The total early vote in 2014 was 28.3 million in an election where more than 83 million Americans voted. That was a low turnout (about 36 percent) even by usual standards of a midterm, when there’s an expected drop off from presidential elections.

Forecasters aren’t predicting that overall turnout this year will hit 2016 levels (137.5 million; more than 60 percent of the electorate), but Democratic and Republican analysts, along with independent political scientists, say turnout could approach 50 percent, levels not seen for a midterm since the turbulent 1960s.

Booms in states not used to exciting midterms

It’s one thing to see Virginia more than doubling its 2014 early turnout. Voters there showed their intensity last year in their governor’s race, with record absentee ballot requests and returns and a solid turnout for both parties.

But then there’s Tennessee. The state has settled firmly into Republican-dominated territory. In 2014, there wasn’t a single statewide race that received national attention or a truly competitive House election.

But with an open Senate seat thanks to the retirement of Republican Bob Corker, voters are more than eager this year. Through Thursday, early turnout was 217 percent of what it was in 2014. It’s even approaching early turnout from 2016, at 80 percent of that presidential-year mark.

Several other states with competitive Senate or governor’s races — Texas, Nevada, Georgia, among others — are nearing double the 2014 early totals.

In states that require party registration, Democrats have cast 41 percent of the early ballots, compared to 36 percent for Republicans. Party strategists on both sides say they are far exceeding their usual numbers in key locales — urban strongholds for Democrats and more rural counties for Republicans.

A word of caution from prognosticators: The party analysis isn’t always an indicator of final outcomes. There are crossover voters, even in this hyperpartisan era. And there are independents and third-party voters, as well. For the record, those latter groups account for about 23 percent of the ballots in party registration states.

For the scorekeepers, though, Virginia, among the states that doesn’t have party registration, is replicating its 2017 voting boom — and Democrats swept the top offices last year even amid strong GOP turnout.

Trends in Florida’s early voting suggest a surge in young voters, a group that historically has low turnout in midterm cycles.

Of the 124,000 Floridians aged 18 to 29 who had voted in person at early polling stations as of Thursday, nearly a third did not vote in the presidential election in 2016, according to analysis by University of Florida political science professor Daniel Smith. About half of those new voters were newly registered.

“There are newly energized voters who sat out in 2016, or have registered since then, who are turning out. There’s no question about that,” Smith said.

In contrast, for people 65 and older who had voted early and in person, about 7 percent didn’t vote in 2016.

It cannot be said enough: It’s the voters who don’t often participate in midterms who can make the big difference. There’s plenty of evidence that both major parties’ bases are enthusiastic, but a frequent Election Day voter being so excited that they vote early doesn’t change the math.

So candidates like Democrat Stacey Abrams and Republican Brian Kemp in the Georgia governor’s race are keeping their eye on how many non-2014 voters have cast ballots.

An analysis by Georgia-based data analyst Ryan Anderson finds that 36 percent of the 1.8 million early votes in Georgia are new voters. If that held through Election Day, it would be a huge number. Abrams’ campaign believes it would benefit them, though Republicans nationally note that President Donald Trump brought many new voters to the polls in 2016 — and those voters are still “new” midterm voters.

That said, at least in Georgia, the racial and gender breakdown of the new voters bodes well for Abrams, who is trying to spike turnout among nonwhites, women and millennials.

Anderson’s analysis finds that barely more than half of the new voters are white in a state where the GOP wants the white share of the electorate to be push toward the mid-60s. Among the other findings: new female voters outnumber men by more than 70,000.

The bright spot for Kemp: More than half of early votes come from voters over 65 (though that total includes all races), and there is intense turnout in many of the state’s most conservative areas beyond metro Atlanta.