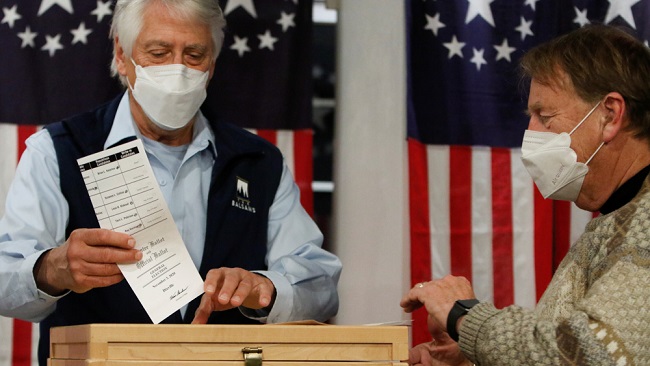 American voters in Dixville Notch, a village of 12 residents in the US state of New Hampshire, kicked off Election Day at midnight on Tuesday by voting unanimously for Democratic nominee Joe Biden.

The tiny northeastern town in the middle of the forest, near the Canadian border, has traditionally voted “first in the nation” since 1960.

Neighboring village Millsfield also begins voting at midnight but a third village in the area, which typically follows the same tradition, canceled overnight voting due to the coronavirus pandemic.

While many early votes are believed to have been cast by Democrats — encouraged by Biden to take advantage of the opportunity — Trump’s campaign is hoping for a massive wave of Republican supporters voting in person on Tuesday.

“We’re going to have another beautiful victory tomorrow,” he said at a rally in Grand Rapids, Michigan late Monday.

“We’re going to make history once again,” he said.

Trump earlier rallied in Kenosha, Wisconsin, which was at the center of anti-racism protests this summer after African-American Jacob Blake was shot in the back by the police.

The US president was in a final hour bid to prove the polls wrong, while his Democratic challenger Joe Biden predicted victory and told America to “take back” democracy.

“We brought law and order to Kenosha,” Trump said to cheers, as soon as he took the stage. “They’re waging war on our police.”

The US president is trailing Biden in almost every poll amid his poor handling of the COVID-19 pandemic that has taken some 231,000 American lives and badly damaged the economy that had been his biggest selling point.

Biden, 77, made his own closing argument on Monday with events in Cleveland, Ohio, and then Pittsburgh in the ultimate swing state of Pennsylvania.

“I have a feeling we’re coming together for a big win tomorrow,” he said. “It’s time to stand up and take back our democracy.”

“I’m hoping for a straightforward, peaceful election, a lot of people showing up,” Biden told reporters in Pittsburgh.

For weeks, Trump has made unprecedented claims that his Democratic opponent will bring anarchy and that attempts are being made to rig the result against him.

He focused especially on battleground Pennsylvania’s rule allowing absentee ballots received within three days after Tuesday to be counted.

In a tweet flagged with a warning label by Twitter on Monday, he said this would “allow rampant and unchecked cheating and will undermine our entire systems of laws.”

“It will also induce violence in the streets. Something must be done!” Trump tweeted.

“It’s going to be cheating,” he said during the Wisconsin rally.