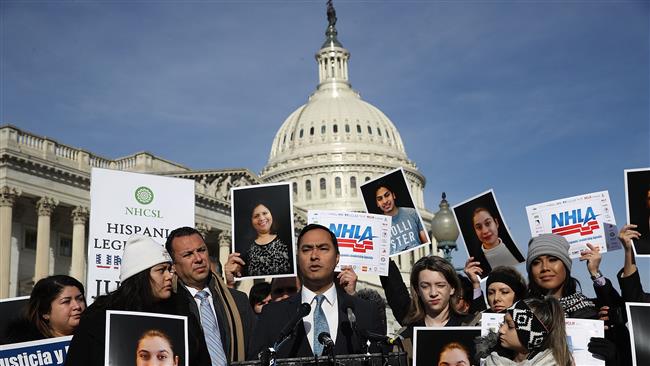 The US government has officially shut down after lawmakers in the upper chamber of Congress failed to reach a deal on a short-term budget for funding government operations.

Senators were still negotiating on the Senate floor after the midnight deadline passed, but the White House issued a statement blaming opposition Democrats for the crisis.

Republicans in the Senate fell well short of the 60 votes necessary to pass a temporary spending bill on Friday, which had passed the House of Representatives on Thursday.

The federal government has been operating on a third temporary funding measure since the current fiscal year began in October.

Senate Democrats blocked consideration of the bill to keep the government operating.

The vast majority of Democratic senators have said they would not support the legislation unless it includes protections for hundreds of thousands of young illegal immigrants, but Republicans have so far refused.

However, senators from both parties were trying to reach a new deal to reopen the government quickly, possibly just hours after the midnight deadline passed.

Trump admitted Friday that chances were “not looking good” that 11th-hour talks in Congress would break the impasse, blaming Democrats for the deadlock.

A meeting at the White House between Senate Minority Leader Charles Schumer, a Democrat from New York,  and President Trump failed to break the stalemate on Friday.

The White House was quick to blame Democrats for the shutdown.

“Senate Democrats own the Schumer Shutdown,” the White House press secretary, Sarah Huckabee Sanders, said in a statement. “Tonight, they put politics above our national security, military families, and our country’s ability to serve all Americans.”

Democrats hit back, saying Republicans were responsible for the management of a government in their control.

“A Republican president occupies the White House, and Republicans hold the majority in both the House of Representatives and the Senate,” said Representative Nita Lowey, a Democrat from New York.

There have been four government shutdowns since 1990. In the last one in 2013, government funding lapsed for 16 full days and more than 800,000 government workers were put on temporary leave.

Essential institutions like the White House, Congress, military and law enforcement would continue working but with reduced staff. Some agencies would shut altogether. But others in the massive bureaucracy will be sent home without pay.