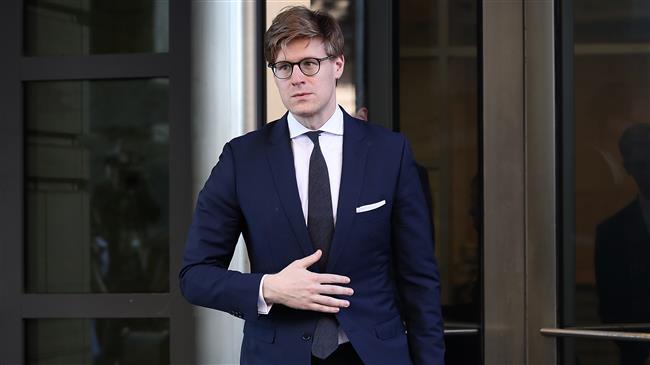 A former lawyer at a powerful New York-based law firm pleads guilty to lying to Special Counsel Robert Mueller who is probing the Trump campaign’s alleged collusion with Russia.

Alex van der Zwaan was charged on February 16 with “willfully and knowingly making materially false, fictitious and fraudulent statements” to both the special counsel’s office and FBI investigators.

On Tuesday, Zwaan admitted in federal court in Washington that he had lied to prosecutors about a September 2016 conversation with Rick Gates, a former Trump aide.

The conversation the 33-year-old Dutch citizen had with Gates was about work they had done together for a Ukrainian political party aligned with Russia.

Zwaan, the son-in-law of a Russia-based billionaire, also confessed that he had deleted records of email exchanges that prosecutors had sought.

Mueller’s team had previously accused Manafort and Gates of secretly funneling $4 million through offshore accounts to pay for a report regarding Ukraine.

In fall, both were charged with laundering money and other crimes pertaining to consultations they had with the Ukrainian political party headed by former President Viktor F. Yanukovych, but they have pleaded not guilty.

Experts say the new charge will put more pressure on Manafort and Gates to cooperate with Mueller in his probe into Russia’s alleged meddling in the US 2016 presidential election.

President Donald Trump has repeatedly denied allegations that his campaign colluded with Russians and has condemned the investigations. Russia has also denied the allegations. Trump has labeled Mueller’s probe as a “witch hunt,” and has suggested that Russians might have meddled in favor of Clinton.

On Friday, Mueller indicted 13 Russian nationals and three Russian entities accused of interfering in elections in the United States.

The indictment alleges the goal of the Russians was to support then-candidate Trump and hurt his Democratic opponent, Hillary Clinton.