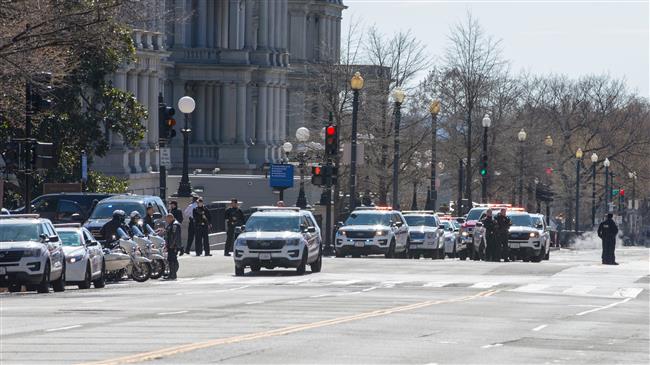 US: Man shoots himself dead outside White House 0

A man has shot himself dead outside the White House, the US Secret Service – in charge of protecting the residence of the American president – announced, noting that no one else was harmed in the incident.

“At approximately 11.46am, a white male suffered a self-inflicted gun-shot wound to the head outside the North White House fence line. The subject is deceased,” said the Secret Service in a statement on Saturday.

It further added, “The subject approached the vicinity of the North White House fence line and removed a concealed handgun and fired several rounds, none of which appear at this time to have been directed towards the White House.”

The identity of the dead man and the motive behind his action remain unclear. Washington DC Police Department, which is leading the investigation into the incident, announced later in the day that it was “working to notify next of kin” of the dead individual, hinting that he has been identified.

At the time of the incident, US President Donald Trump was away from the White House and staying with his wife Melania at his Florida vacation spot, Trump’s Mar-a-Lago property.

According to local reports, Trump spent the morning at one of his golf courses in the southeastern state before flying back to Washington to attend an evening event.

Donald Trump was not in residence at the time of the incident. The president and his wife Melania were in Florida, staying at Trump’s Mar-a-Lago property. Trump spent the morning at one of his golf courses in the state before flying back to Washington to attend an evening event.

At the time of the shooting, which took place near the main entrance of the White House, the building was placed on lockdown. Members of the White House press corps tweeted that they were sheltering in the briefing room.