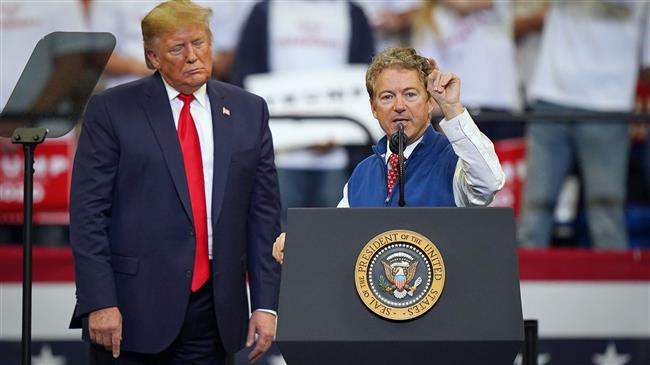 A new poll shows support for impeaching US President Donald Trump has slipped since mid-October.

According to the Morning Consult survey released Wednesday 47 percent of the Americans back impeachment, while in mid-October, a record-high majority, 51 percent, supported it.

American Republican Senator Rand Paul claimed earlier that he had found the identity of the whistleblower, whose revelations lie at the heart of the impeachment inquiry into Trump in the lower chamber of US Congress.

Paul told reporters Tuesday that he was “more than willing” to reveal the name but he preferred to stay focused on the process rather than the person.

“There is no law preventing anybody from saying the name,” he told reporters.

The US president has for a while been hunting for the anonymous whistleblower in part by asking media to release his name.

“There’s nothing that prevents me from saying it now,” Paul said. “I can, and I may, but I can do it right now if I want. Nothing stops me.”

During a Fox News interview he asserted that unlike Trump he did not want the name released for now.

“I want it to be more about the process and less about the person,” Paul argued. “Nothing stops me. There’s no law that stops me from doing it other than that I don’t want to make it about the one individual.”

Trump claims he was investigating corruption in Ukraine involving his potential 2020 rival, Joe Biden, but Democrats argue that he was engaged in a quid pro quo.

“We also now know the name of the whistleblower. The whistleblower needs to come forward as a material witness because he worked for Joe Biden at the same time Hunter Biden was getting money from corrupt oligarchs,” Paul said at the rally after Trump invited him onstage.