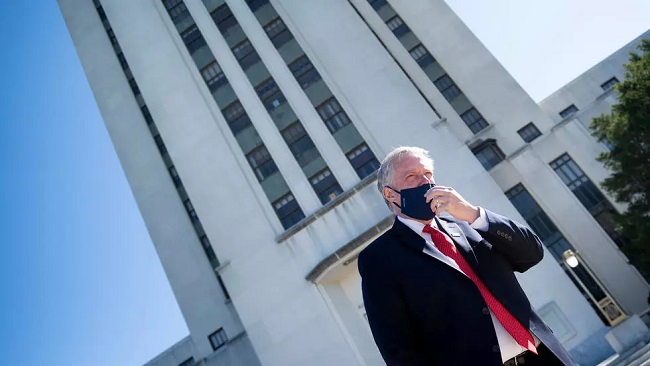 US: President Trump improving but doctors were ‘very concerned’ 0

White House Chief of Staff Mark Meadows said Saturday Donald Trump’s health, including a fall in his blood oxygen level, had left the president’s doctors “very concerned” but that he had improved and there was never a risk he would have to hand over power.

Meadows’ comments to Fox News capped a day of back-and-forth in which conflicting reports about the president’s health created an opaque understanding of the leader’s actual fitness.

“He’s made unbelievable improvements from yesterday morning, when I know a number of us, the doctor and I, were very concerned,” Meadows said.

Earlier in the day a source familiar with the president’s health — later named in US media as none other than Meadows — had given a contradictory assessment stating that “the president’s vitals over the last 24 hours were very concerning.”

The statement also seemed at odds with an assessment by White House doctors that the president was “doing very well.”

Meadows seemed to clarify late Saturday that comments pertaining to concerningly poor health had applied to the day prior.

“Yesterday morning, we were real concerned… he had a fever and his blood oxygen level had dropped rapidly,” Meadows told Fox.

However, “there was never a consideration and never even a risk of a transition of power,” Meadows said.

Late Saturday, White House doctor Sean Conley said Trump was “not yet out of the woods,” but that the medical team was “cautiously optimistic.”

Meadows echoed a similar sentiment stating that he was “very, very optimistic, based on the current results.”

The president posted a video to Twitter late Saturday appearing relaxed in an open-collar shirt and blue suit jacket, telling viewers he would be “back soon” — but acknowledging that the crucial coming days would be “the real test.”