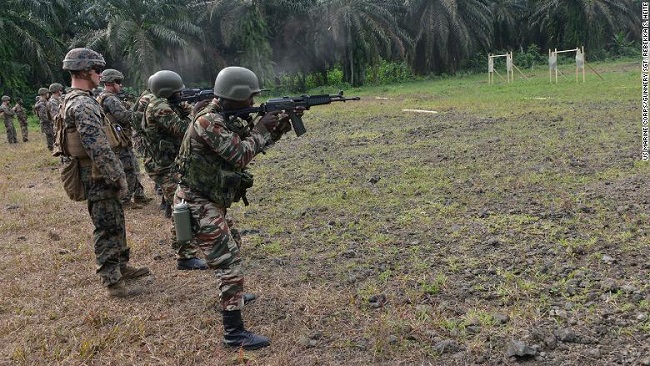 US to cut special forces in Africa 0

The United States plans to sharply reduce the number of American Special Operations forces in Africa as part of a new Pentagon strategy that focuses on countering “rising threats” from Russia and China, according to a report.

Defense Secretary James Mattis has ordered a review of America’s elite commando missions in recent weeks which could see counterterrorism forces in Africa slashed by as much as half over the next three years, The New York Times reported on Monday.

The review was issued amid an ongoing assessment of Special Operations forces worldwide after four American service members were killed during an ambush in Niger last year.

US troops killed in Niger ambush

The US has currently more than 7,300 Special Operations troops deployed to 92 countries, with many conducting shadow wars against militants in Yemen, Libya, Somalia and elsewhere.

Mattis and Gen. Joseph Dunford Jr., the chairman of the Joint Chiefs of Staff, are worried that the commandos are spread too thin, Pentagon officials said.

The two military leaders have ordered Special Operations and Africa commands to present a range of options by mid-June to meet other challenges, which, in addition to Russia and China, also include North Korea and Iran.

Last month, a Pentagon investigation of the botched US operation in Niger found mistakes on all military levels in the secret mission, which was launched on October 4, 2017 to kill or capture a terrorist leader associated with Daesh.

A group of 30 Nigerien forces accompanied 11 Green Berets, who were traveling in an unarmored SUV. But the mission failed spectacularly when the US and Nigerien forces came under heavy fire from militants in an ambush near the village of Tongo.

The deadly attack accelerated Mattis’s decision to cut some counterterrorism missions in Africa to focus on global powers, two Pentagon officials told the Times on condition of anonymity.

The potential changes are part of a transition period to focus on what Mattis has described as “growing threats” from Russia and China, as outlined in the Pentagon’s new national defense strategy.

“We face growing threats from revisionist powers as different as China and Russia, nations that seek to create a world consistent with their authoritarian models,” Mattis said in a speech at Johns Hopkins University in January as he outlined the new strategy.

“Our military is still strong, yet our competitive edge has eroded in every domain of warfare — air, land, sea, space and cyberspace — and is continually eroding,” he added.

Even before Mattis’s directive, the Special Operations Command had started relying on conventional troops to help handle some of the new challenges since the September 11, 2001 attacks.

In places such as Afghanistan and Syria, where Special Operations forces are frequently in combat, conventional soldiers and Marines have also been attached to commando units as additional security or firepower.

At the same time, more Special Operations teams have been deployed to the Baltic nations — Estonia, Latvia and Lithuania — as well as Eastern Europe to help local commandos identify and confront possible aggression from Russia.