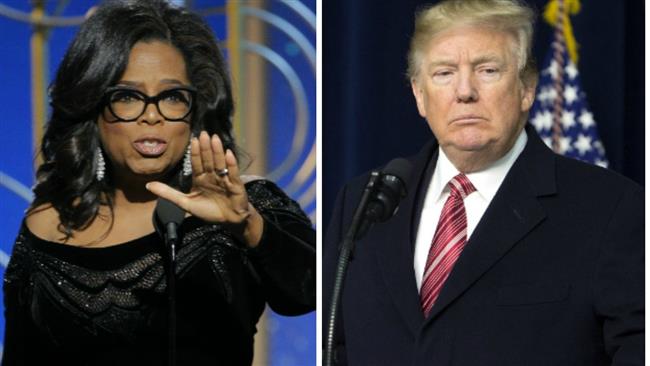 US President Donald Trump says he could beat  media proprietor, talk show host Oprah Winfrey in the 2020 presidential race, but does not think she will run.

“Yeah, I’ll beat Oprah. Oprah will be lots of fun,” he told reporters during a meeting with lawmakers on Tuesday. “I don’t think she’s going to run.”

Winfrey’s rousing speech at the Golden Globes awards ignited speculation that she could run for president in 2020. She accepted the Cecil B. DeMille lifetime achievement award on Sunday; the first black woman to be awarded the prize.

“I want all the girls watching here, now, to know that a new day is on the horizon! And when that new day finally dawns, it will be because of a lot of magnificent women, many of whom are right here in this room tonight, and some pretty phenomenal men, fighting hard to make sure that they become the leaders who take us to the time when nobody ever has to say “me too” again!” she said in the speech.

Gayle King, a close friend with Winfrey, said on “CBS This Morning” earlier Tuesday that Winfrey finds the idea “intriguing” but added that she doesn’t believe Winfrey is actually considering it right now.

“I don’t think at this point she is actually considering it” King said. “I also know, after years of watching the Oprah show, you always have the right to change your mind.”

Winfrey, an African-American woman who survived rape and grew up in poverty, is a self-made billionaire capable of emotionally connecting with ordinary Americans through the media.

Winfrey threw her weight behind US Democratic presidential nominee Hillary Clinton, supporting Clinton in the battle against Trump.