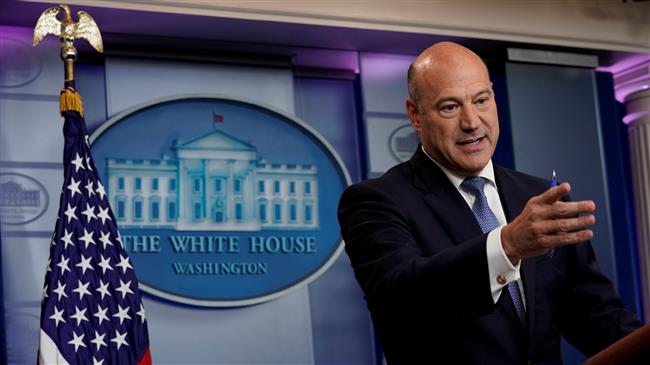 Cohn,the director of the National Economic Council, handed in his notice on Tuesday after a little more than a year on the job.

His resignation came after Trump announced plans last week to impose a 25-percent tariff on steel imports and a 10-percent one on aluminum, a move that Cohn had firmly opposed.

“It has been an honor to serve my country and enact pro-growth economic policies to benefit the American people,” the adviser said in a statement about his resignation, refusing to provide further details. “I am grateful to the President for giving me this opportunity and wish him and the Administration great success in the future.”

Trump’s plans to impose the tariffs has reportedly triggered an intense debate within the oval office between Cohn and other advocates of free trade, on one side, and protectionist advisers on the other.

In response to Cohn’s resignation, Trump said in a statement that “Gary has been my chief economic adviser and did a superb job in driving our agenda … He is a rare talent, and I thank him for his dedicated service to the American people.”

The president also said in a tweet that he would make a decision soon on appointing a new chief economic adviser after Cohn’s resignation from the post.

“Will be making a decision soon on the appointment of new Chief Economic Advisor. Many people wanting the job – will choose wisely!” Trump wrote.

Unveiled on Thursday, the plan sparked a flurry of criticism both at home and aboard.

Trump believes the tariffs will safeguard US jobs, but economists say the measures will destroy more jobs than they create and will hurt the very US companies and workers that Trump has said he aims to protect.

Beijing said it was ready to “take necessary measures” against Washington if it aimed to harm China’s economic interests following the imposed tariffs.

During his presidential campaign, Trump repeatedly blamed what he called unfair trade deals and allegedly abusive practices by countries such as China and Mexico for the massive US trade deficit and the loss of high-paying American factory jobs.

Also on Tuesday, the US president criticized the European Union’s trade rules as the 28-member bloc threatened to take retaliatory measures against Washington’s new trade tariffs.

“The United States has been taken advantage of by other countries, both friendly and not so friendly, for many, many decades, and we have a trade deficit of $800bn per year, and that’s not going to happen with me,” Trump said at a press conference with Swedish Prime Minister Stefan Löfven at the White House.

Trump had earlier warned to impose more tariffs on car imports from the European Union despite the new tariff plan, with member states being concerned about the impact of the new tariffs on their economies.

Following Trump’s announcement, European Commission chief Jean-Claude Juncker complained that the proposed tariffs were a blatant intervention that amounted to protectionism, vowing to act “firmly” against the plan.

“We will not sit idly while our industry is hit with unfair measures that put thousands of European jobs at risk,” Juncker said.

EU’s response matches similar measures during a 2003 “steel war” unleashed by George W. Bush’s administration that eventually prompted the US to back down before the EU carried out its threat.