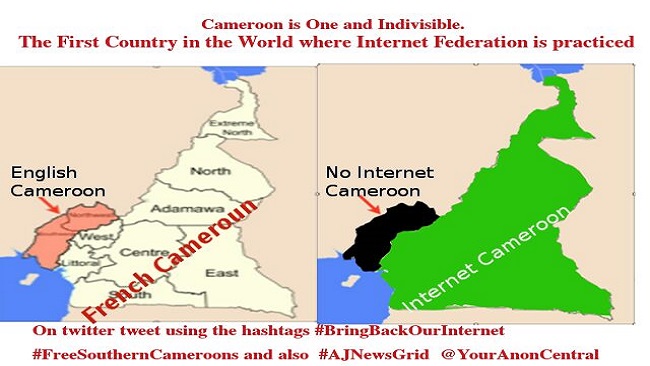 On Wednesday the 17th of January 2018, Ambazonians woke up much to their amazement to find internet access restored in their country. After more than four months of complete internet shutdown, our people are ‘temporarily’ enjoying a fundamental freedom thanks to the ‘goodwill’ of someone in Yaoundé.

There have been several conferences, initiatives and lectures around the world over the last few years on the role of governments on internet freedom and human rights. The role of the internet can’t be overemphasized in the twenty-first century and the United Nations has stated unequivocally that it’s a fundamental human right along with freedom of Opinion and Expression.

Mindful of the presence of a CAF delegation in the country to scrutinize infrastructures to assess La Republique’s readiness to host next year’s AFCON, CPDM has shamelessly re-instated internet access in our country. The evidence is overwhelming that even the darkest minds in La Republique understand the ignominy of cutting off internet access. The simple truth is that Yaoundé has no respect for the human rights of Ambazonians. This flagrant abuse of a fundamental human right is intolerable. Whilst the excitement amongst the population is understandable, the unlawful activity of restricting internet access is one of the most shameful in a long list of unpardonable law-breaking actions from Biya and his mob.

Small and medium size businesses are struggling in Ambaland. Many small businesses have ceased trading which has resulted to higher unemployment in a country where joblessness is unacceptably high. Do the authorities in Yaoundé care about the loss of business and subsequent suffering in Ambaland? The answer is simply NO.

With high unemployment and dreadful misemployment, the youths of Ambaland are getting more and more frustrated. The cumulative effect of this gloomy scenario is the growth and continuous growth of a disenchanted populace. These people have a sense of worthlessness, and are left with no option but to vent their anger in guerrilla style attacks on the forces of La Republique. These attacks are becoming more and more frequent in Ambaland with devastating consequences.

The striking intellectual inanimation from the so-called leaders in Yaoundé is profusely ostensible. Until they realize that actions like cutting off the internet are counterproductive, the road to peaceful coexistence is rough and unexciting. The casualties their military is currently suffering stand to escalate.

Calling Ambazonians dogs, terrorists, banning the Consortium, firing at peaceful protesters and cutting off the internet etc haven’t yielded any positive result for Yaoundé. The results of these poorly advised and unlawful actions are violence and more violence.