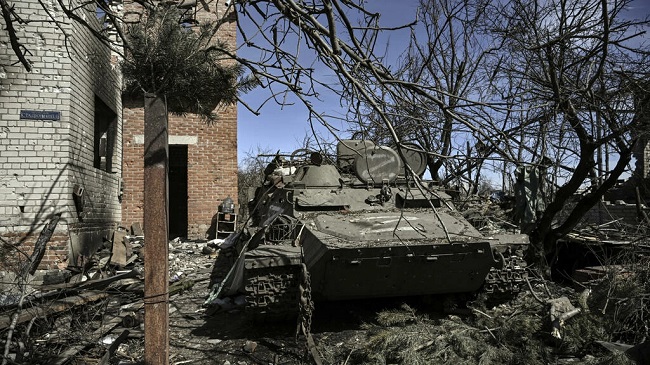 Russia and Ukraine begin their first face-to-face talks in weeks at Dolmabahce palace in Istanbul to try and end the nearly five-week-old war which has killed an estimated 20,000 people.

Welcoming the delegations, Turkish President Recep Tayyip Erdogan says “both parties have legitimate concerns” and urges them to “put an end to this tragedy”.

“The whole world is waiting for good news from you,” he says.

Russian President Vladimir Putin has demanded the “demilitarisation” and “denazification” of Ukraine, that it become a neutral country and that Kyiv recognize the breakaway Donbas region and Russian-annexed Crimea peninsula as no longer part of Ukraine.

Ukraine’s Foreign Minister Dmytro Kuleba says the talks will focus on easing the humanitarian situation. He says there is little room for agreement on Putin’s territorial demands, saying “We do not trade people, land and sovereignty.”

Ukraine says it is resuming the evacuation of civilians from war-scarred regions after a one-day pause over what it called the threat of Russian attacks.

Ukraine says Russia is still trying to break through to Kyiv, despite Moscow saying it plans to focus on the Donbas region

But fighting appeared to be continuing around the area, from where Russian forces were attempting to advance towards the capital, AFP journalists report.

Ukraine says Russia is still trying to break through to Kyiv, despite signals from Moscow that it is planning to scale back its offensive to focus on the eastern Donbas region.

Governor Vitaly Kim says most people inside the building “escaped miraculously” but several civilians and soldiers are unaccounted for.

Ukrainian officials decline to confirm the incident, advising people to follow “only the official information” and warning about “various conspiracy theories”.

Abramovich and the negotiators reportedly developed symptoms including red eyes and peeling skin, though they later recovered.

Britain’s defence ministry says Russia’s Wagner Group has deployed its mercenaries to eastern Ukraine, adding that more than 1,000 fighters are expected to participate in the war after Russian setbacks.

US President Joe Biden is again forced to defend his remarks that Putin “cannot stay in power”, saying the comments did not signal a push for regime change but merely expressed his “moral outrage”.

The White House unveils budget plans, including $6.9 billion (6.3 billion euros) in funding for Ukraine and NATO, with another $1 billion towards countering Moscow’s influence.

A senior Ukrainian official says at least 5,000 people have been buried in the besieged southern city of Mariupol since the invasion began, but that bodies have gone uncollected for the past 10 days amid continuing Russian shelling.

The foreign ministry describes the humanitarian situation in the city as “catastrophic”.

Ukraine’s Economy Minister Yulia Svyrydenko says the invasion has cost her country an estimated $564.9 billion, including immediate damage and expected hits to trade and economic activity.