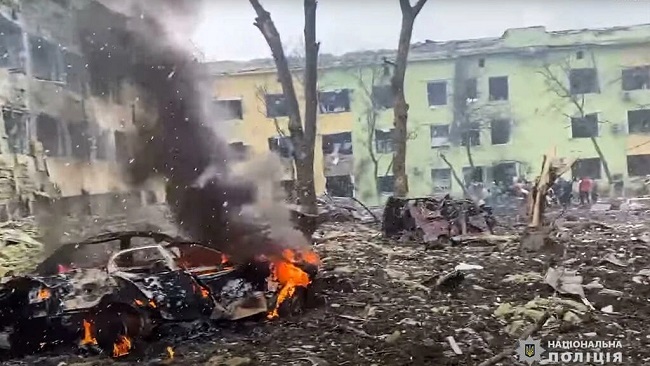 Ukraine’s President Volodymyr Zelensky says that 130 people have been saved after the bombing of a theatre in the port city of Mariupol, besieged by Russian forces, but that “hundreds” are still trapped in rubble.

He promises to continue rescue operations in Mariupol “despite shelling” in the southern port city that has suffered vast destruction.

Xi speaks out against war

Chinese President Xi Jinping speaks out against conflict during his first call with his US counterpart Joe Biden since the Russian invasion of Ukraine, Chinese state TV reports.

He says during the nearly two-hour-long call Beijing and Washington should shoulder “our due international responsibilities” for peace and that war is “in no one’s interest”.

Russian forces destroy an aircraft repair plant near Lviv airport but no one was hurt, Mayor Andriy Sadovyi says on the messaging app Telegram.

The western city is just 70 kilometres (45 miles) from the border with NATO member Poland.

Authorities in the capital Kyiv say one person was killed when a Russian rocket struck residential tower blocks in the northwestern suburbs. They said a school and playground were also hit.

Russian troops and their separatist allies are fighting in the centre of Mariupol, the Russian defence ministry says.

Backed by Russian troops, separatists from the self-proclaimed Lugansk People’s Republic have also “liberated more than 90 percent of the republic’s territory”, the ministry adds.

One dead, one trapped in Kharkiv

In the eastern city of Kharkiv, Russian strikes demolish the six-storey building of a higher education institution, killing one person and leaving another trapped in the wreckage, officials say.

The UN warns that humanitarian needs are becoming ever more urgent across eastern Ukraine, with a potentially fatal lack of food, water and medicines in besieged cities such as Mariupol and Sumy.

Russian President Vladimir Putin accuses Ukrainian authorities of stalling talks, but added that Moscow is ready to search for solutions as he speaks with German Chancellor Olaf Scholz.

US Secretary of State Antony Blinken warns that Russia has not produced “any meaningful efforts” to end the war.

Scholz, as current G7 president, invites the leaders of the world’s top industrialised countries to a meeting on Ukraine as part of EU and NATO summits next week.

Britain’s broadcasting regulator revokes the licence of Russia’s state-funded television channel RT, in the latest international repercussion for Moscow after its invasion of Ukraine.

The International Monetary Fund, World Bank and other top world lenders warn of “extensive” economic fallout from the Ukraine war and express “horror” at the “devastating human catastrophe”.

The three Baltic countries of Estonia, Latvia and Lithuania announce the expulsion of 10 Russian diplomats over Moscow’s invasion of Ukraine.

More than 3.25 million refugees have fled Ukraine since the Russian invasion, the United Nations says, with more than two million crossing the Polish border.