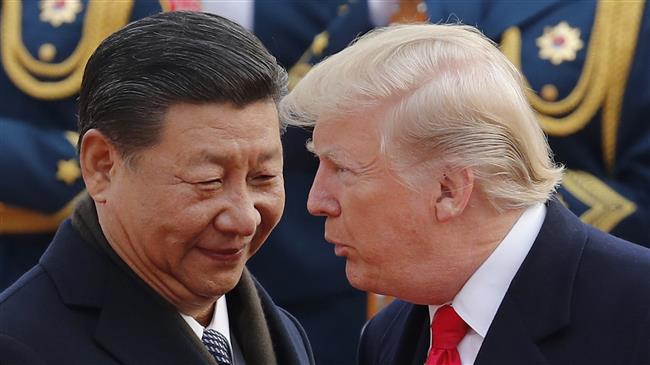 Where will a trade war with China lead the US? 0

On Friday, US President Donald Trump carried his protectionist promises to another level and slapped tariffs on more than $34 billion worth of Chinese products. And this is just the beginning. Another $16 billion is on its way in two weeks from now, adding to a total of $50 billion of Chinese goods that would be charged a 25 percent import tax at US borders. And yet even more is to come. Trump has threatened another $500 billion worth of Chinese goods with tariffs if China retaliates. On Thursday, Trump said that initially, “34 [billion], and then you have another 16 in two weeks and then as you know we have 200 billion in abeyance and then after the 200 billion we have 300 billion in abeyance. Ok? So we have 50 plus 200 plus almost 300.”

Of course China has retaliated swiftly, actually very swiftly. Two hours after the Trump administration announced the first salvo of tariffs, China immediately torpedoed back by imposing its own 25 percent tariffs on $34 billion worth of US goods – most of them strategic exports such as soybeans and automobiles, chosen by China to sting crucial US exports. The Chinese government then issued a statement declaring that the United States “has launched the biggest trade war in economic history so far.”

Vox reports, “China has deliberately targeted big US agricultural exports like soybeans that come from states in the heart of Trump country, where neither the president nor his party want to see economic instability or job losses right before the 2018 midterm elections.” So basically China is attempting to both retaliate and also discredit a “protectionist” Republican president among his staunchest supporters.

The latter goal is one that Trump is less likely to achieve when imposing his tariffs on a country where the president is selected by the Communist Party, not by popular vote, thus creating an obvious advantage for the Chinese against Trump if China’s version of tariffs manage to hurt US exports, and as a result hurt US manufacturers.

Trump had promised his popular base that he would “make America great again” by supporting American manufacturers, but he never substantially explained how he would manage to achieve this lofty goal in a country where the “Made in China” tag is so prevalent that if one sees another country on a label, she might once again turn around to make sure. Almost one and a half years into his presidency, it seems imposing tariffs are his solution to the demise of American production.

But tariffs have been historically a double edged sword and while they might limit buying foreign products they almost immediately draw the ire of the countries which the tariffs are imposed on, effectively suffocating exports because of the retaliatory measures.

So in a nutshell, you don’t gain much in trade wars, at least never in the past. And unless the protectionist businessman-turned president has some magical panacea, the recent tariffs of his administration will be no exception. As the Smoot-Hawley Tariff Act of 1930 illustrates, tariffs not only hurt US exports but destroyed global trade. World trade decreased by some 66 percent between 1929 and 1934 while the Act was in place. So basically as a consequence of trade wars, all players in the international economic system tend to incur substantial losses as overall trade plummets and prices increase.

So if there is no guarantee that the Trump imposed tariffs will make America great again, there are fewer guarantees that they would not be detrimental to the US. Actually one could both historically and theoretically argue that the possibility that the Trump tariffs would actually cause more injury to US manufacturing is much higher than the tariffs committing to production growth.

This is exactly why, back in June 14, Christine Lagarde, the head of the International Monetary Fund (IMF), warned that the trade war sparked by unilateral US import tariffs would have no winners and that the tit-for-tat cycle of retaliation would only create “losers on both sides.” She said the outcome of such a trade conflict would have a “serious” economic impact on the US and global economies, including by causing inflation to speed up

In the case of China, if Trump imposes tariffs on all the $500 billion of goods he claims, that would represent the lion’s share of all of China’s exports to the US. This basically means inflation rates in the US would spike. For instance prices for washing machines have increased by 16 percent in recent months, and this is only the beginning of a long trade fight.

And to Trump’s relief, exports account for only 12 percent of US GDP (Compare this with Canada’s 31 percent of GDP) where a country with 320 million makes an isolationist economic policy a more viable option for Trump who views countries like China as national security threats.

So both set of economic arguments, for or against Trump’s new trade policy, have some credit to claim. Those opposed point to historical precedent, theoretical inconsistency, rising inflation and lower levels of exports as arguments against Trump’s tariffs. Those in favor of Trump’s tariffs point to US trade imbalance, relatively lower levels of exports and increased national security to justify the new policy.

What the future holds?

Indeed it is too soon to conclude how the trade war with China might conclude. One factor is whether China could rally other countries to support Beijing against the US. Again, it is too soon to see whether disgruntled traditional US allies such as the EU, Canada, Mexico and other countries that have also been hit by the Trump tariffs would support Beijing over Washington. For now this seems far-fetched, but if Trump prevails over his Democrat opponents and pro-trade mainstream Republican rivals, then, as Paul Haavardsrud puts it: “the international community will be left to reinvent a global trade order that’s not anchored by the US.” In the long term, this new global order would definitely translate to a US with less influence in the new world order.

Couple the new Trump tariffs with statements from him that threaten to withdraw from the WTO, pull out of NAFTA and other international organizations and accords and then you can see, if pursued, Trump’s policies will structure new international alliances where the US is not necessarily the dominant player and where others like China and Russia are ready to lead.