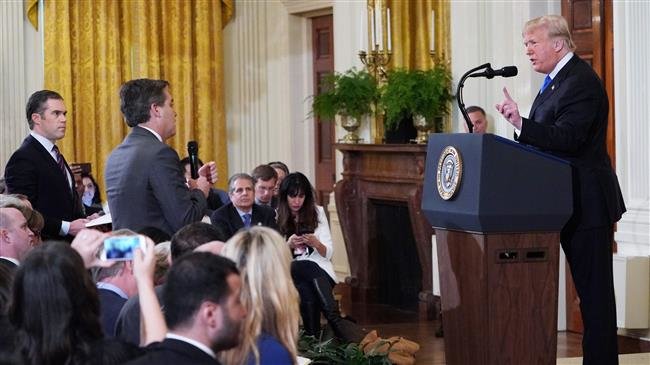 The White House has suspended CNN correspondent Jim Acosta of his press credentials following his tense exchange with President Donald Trump during a press conference.

During Wednesday’s press conference at the White House, a combative Trump allowed Acosta, CNN’s chief White House correspondent, to ask his question only to cut him off shortly after and branding the journalist an “enemy of the people.”

A visibly angry Trump called Acosta a “rude, terrible person,” after he refused the president’s orders to sit down and give up the microphone during the conference one day after the US midterm congressional elections.

“CNN must be ashamed of itself having you working for them,” the president told Acosta. “You are a rude terrible person.”

Trump then asked another reporter to speak but Acosta refused to sit down. That prompted a White House aide to try to to pull the microphone from Acosta’s hands but the CNN reporter pushed her away and kept talking until Trump walked away from the podium as if he was going to leave the room.

Shortly after the heated moment, White House Press Secretary Sarah Huckabee Sanders announced on Twitter that Acosta was suspended for “placing his hands on a young woman just trying to do her job as a White House intern.”

“This conduct is absolutely unacceptable. It is also completely disrespectful to the reporter’s colleagues not to allow them an opportunity to ask a question. President Trump has given the press more access than any President in history,” she added.

CNN called the accusation a lie, arguing that Acosta was banned in retaliation for his challenging questions at today’s press conference.

“This unprecedented decision is a threat to our democracy and the country deserves better. Jim Acosta has our full support,” the network said in a statement.

Acosta also accused the White House of making up lies and said the real reason behind the decision was that Trump didn’t want “to be called out on his falsehoods.”

During the press conference, Acosta asked Trump why during his midterm congressional rallies he falsely called a migrant caravan moving towards the US an “invasion” while they were hundreds of miles away in Mexico and “posed no threat to the US.”

Trump insisted in response that the caravan was indeed a threat and he would do all in his power to stop it.

Acosta then tried to slip in another question about the ongoing investigation into Trump’s alleged ties with Russia and whether he was concerned about indictments now that Democrats were in control of the House of Representatives.

“I’m not concerned about anything with the Russian investigation because it a hoax… that’s enough! Put down the mic!” Trump said in response.

It was not Trump’s only scrap with the media during the press conference as he shut down several other reporters in the same manner and proceeded to once again accuse some media of being the “enemy” of American people.