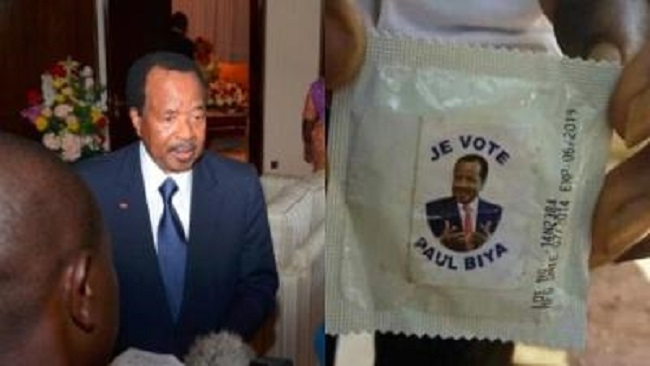 Politician can do just about anything to ensure they clinch whatever seats they are contesting for.

Some would campaign by pouring money and other goodies such as food, clothes and decent merchandise to the electorates.

However, Cameroon President Paul Biya revolutionised the game during the final leg of his presidential campaign by distributing condoms with his face and messages calling for his re-election to citizens.

Biya, who has ruled the country for the past 35 years, or should we say his advisers thought it wise to have the words ”Je Vote Paul Biya”(I vote for Paul Biya) and a photo of the 85-yea-old president printed on both sides of the condoms.

It should be noted Cameroon will be going to the ballot to elect a new president on Sunday, October 7, and Biya’s team did all it could to remind voters to do the necessary come D-day.

His condom campaign however did not auger well with some people who claimed he should have distributed much useful things.

Others supported him saying he cared about his people and their health hence the move.

Despite the minor controversy, political analysts in the country hold that Biya is pitted to with the race yet again judging with latest poll.