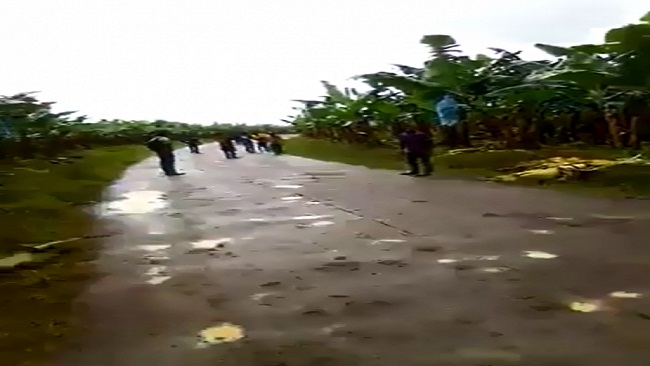 Multiple people were wounded when armed men attacked workers on a banana plantation August 24 in Tiko, in southwestern Cameroon. It’s the second time in less than a month that this plantation, which belongs to a public firm, has been targeted. A man who was injured in the attack spoke to FRANCE 24 about rising violence and insecurity in his region, which is majority English-speaking.

The attack targeted a banana plantation run by the Cameroon Development Cooperation (CDC), a public company operating in the agribusiness sector. The main products produced by the CDC are rubber, palm oil and bananas.

The plantation is located in southwestern Cameroon, which is one of two English-speaking regions in the country (along with the northwest). These two regions are currently engulfed in violence committed by both separatist groups and government forces.

“Men came with firearms and machetes”

A man working in the banana plantation (who asked to remain anonymous due to concerns for his safety) told FRANCE 24 about the August 24 attack.

It was late morning and we were working when the men came. They were carrying guns, cutlasses and wearing rough clothing. Some of them had their faces covered. I would say that there were between 30 and 40 of them. They started beating workers, so I ran away, like many of my colleagues. They burned part of the place where the bananas are processed.

Some of the employees said that the armed men asked them, “Why do you keep working if you aren’t being paid?”

It’s true that we haven’t been paid since June because of the crisis in the region that affected our production. There’s also been a reduction in the amount of palm oil and rubber being produced because of the frequent attacks.

Some have been saying that the armed men were Ambazonians. But we have no idea if this is true as they didn’t disclose who they were.

Other workers told me that soldiers then arrived on site. After the attack, I went to the CDC hospital in Tiko.  It was full of wounded workers – both men and women – though I don’t know how many were wounded exactly.

No one had gunshot wounds but many had knife cuts on their hands, heads, buttocks or legs. Some people had deep wounds that had to be stitched. Some people had bruises. There are still injured people at the hospital.

“Our plantation was already attacked in July. One of the drivers who bring workers out to the plantation was injured along with other workers. I wasn’t there when the attack happened, but I visited the injured in the hospital afterwards.

The situation here is really tough. We live in fear due to the insecurity in the area. The government should try to resolve this issue. We don’t even know when we will be paid again. The company hasn’t said anything.”

Protests organised by lawyers, teachers and students began in the English-speaking regions of Cameroon in late 2016. The organisers of these protests condemned what they saw as the growing marginalisation of English speakers in a country that is majority French-speaking. Many of these protests were brutally halted by security forces.

This repression contributed to the radicalisation of the opposition movement. Amnesty International reported that, starting in late 2017, “moderate voices began to be eclipsed as armed separatist groups, calling for secession and advocating for an armed struggle, grew in profile and support”.

These regions became increasingly militarised. Since then, both Cameroonian security forces and the separatist groups have carried out human rights abuses, causing many residents of these regions to flee.

This crisis has affected the CDC in several different ways. During the past few months, two of its employees were killed, some structures were destroyed and several plantations were closed.

Thousands of jobs are also under threat, as the CDC represents the second-largest employer in the country, according to its website. Our team contacted CDC management to ask, among other things, if they had taken new measures to protect their employees. We did not receive a response by press time and will update this page if we do.