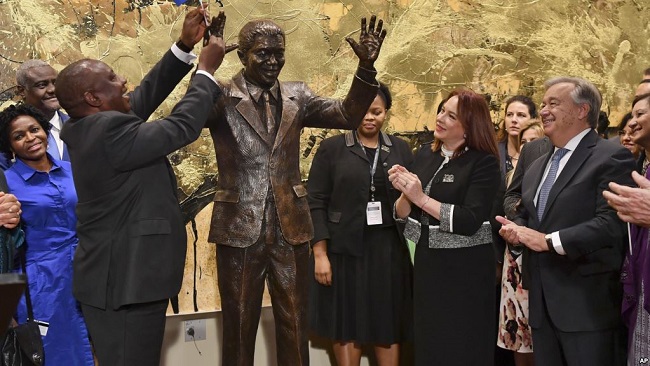 World Leaders Recommit to Peace in Honor of Mandela 0

World leaders Monday recommitted themselves to the search for peace as they gathered for a United Nations summit marking the 100th anniversary of Nelson Mandela’s birth.

The session was being held ahead of Tuesday’s start of the annual debate of the U.N. General Assembly, where most of the world’s leaders are gathered this week.

“Today, we remember a man of great wisdom, quiet dignity and towering achievement, who worked tirelessly for peace and human dignity for people everywhere,” U.N. Secretary-General Antonio Guterres said Monday at the summit’s opening. “This is our organization’s purpose, and as leaders, it is our responsibility.”

“He would come to represent the hopes of millions of South Africans who dreamt of a life unshackled from a system that would limit their potential and stifle their possibilities based merely on the shade of their skin,” Ramaphosa said later at the summit.

The African Union declared 2014-2024 the Nelson Mandela Decade for Reconciliation in Africa. On July 18, 1918, the man affectionately known as “Madiba” was born in the South African village of Mvezo. Mandela died five years ago. In 1994, he was elected South Africa’s first black president.

Leaders and ministers from nearly 160 countries honored Mandela’s commitment to peace and democracy and his tremendous personal sacrifices to end apartheid in his country.

Moussa Faki Mahamat, chair of the African Union Commission, spoke of how Mandela would react to the many challenges facing the world today.

During his lifetime, Mandela founded an organization known as The Elders, which mobilizes former leaders to work together for peace and human rights.

Mandela’s widow, Graca Machel, who co-founded the group, declared, “It is time to say, ‘Enough is enough!'” She told leaders, “Do not let this just be another summit of statements. Bold unprecedented action must follow.”

She urged them to address root causes that fuel conflicts and put aside ego-driven decision-making and inflexible political beliefs.

“You have a moral imperative and the ability to bring the death and destruction we witness on a daily basis to an end,” Machal added. “Humankind will hold you accountable should you allow suffering to continue on your watch.”