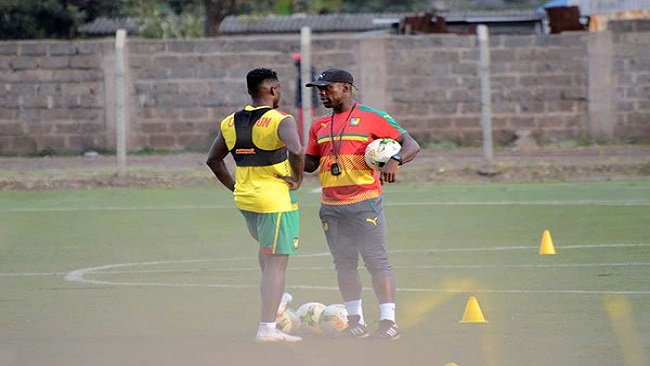 Former Netherlands star Clarence Seedorf is among more than a dozen coaches who will make Africa Cup of Nations debuts this weekend in 2019 qualifiers.

Despite underperforming in three previous managerial posts, the 42-year-old has been given a four-year contract by reigning African champions Cameroon.

His first match in charge of the ‘Indomitable Lions’ is away to minnows Comoros in Group B on Saturday.

Cameroon are guaranteed a place in the expanded 24-team 2019 Cup of Nations as hosts, but were included in the qualifying competition to give them match practice.

Vastly experienced and widely travelled Swede Sven-Goran Eriksson had been favourite for the Cameroon post after 2017 Cup of Nations-winning coach Hugo Broos was sacked.

Having masterminded a surprise fifth African title, Belgian Broos did not deliver at the 2017 Confederations Cup and failure to qualify for the 2018 World Cup was the final straw.

Seedorf got the nod, with fellow former Dutch star Patrick Kluivert as his assistant, having had brief, unsuccessful spells at AC Milan, Shenzhen and Deportivo la Coruna as manager.

“I feel honoured to be given the opportunity to manage this great country,” Seedorf said when appointed.

The big test for the former Ajax Amsterdam, AC Milan and Real Madrid midfielder will come next June when Cameroon host the biennial African football showpiece.

Only another title will satisfy Cameroonian officials and supporters as the country stages the tournament for the first time since 1972, when it was a mere eight-nation event.

Egypt have appointed Mexican Javier Aguirre, a 59-year-old who has coached his homeland and Japan as well as several Spanish clubs, including Atletico Madrid.

He succeeds Hector Cuper, the Argentine not offered a contract extension after the ‘Pharaohs’ flopped at the World Cup, losing all three group matches.

His first assignment is at home to modest Niger and the main issue would appear to be how many goals Mohamed Salah-inspired Egypt win by.

Aguirre got the job ahead of Bosnian Vahid Halilhodzic, who took Algeria to the last 16 at the 2014 World Cup before quitting over what he considered hostile media coverage.

“I am really honoured to be here,” the Mexican said when introduced to the media. “It is my first job in Africa and a big challenge.”

Cuper was often criticised for overly defensive tactics and much attention will now centre on whether Aguirre opts for a more adventurous approach.

While many of the new coaches are non-Africans, Tanzanian officials tired of a lack of delivery by numerous Europeans have signed former Nigeria star Emmanuel Amuneke.

Amuneke scored the goals that gave Nigeria the 1994 Cup of Nations title and played for Barcelona and Sporting Lisbon.

After coaching success with Nigeria at age-limit level, Tanzania hope he can lift them out of mediocrity with their only previous Cup of Nations appearance 38 years ago.

The Ivory Coast are rebuilding after age caught up with “golden generation” stars like Didier Drogba, Salomon Kalou and Kolo Toure.

Belgian Marc Wilmots disappointed as coach of the ‘Elephants’, failing to qualify for this year’s World Cup and losing at home to Guinea in a 2019 Cup of Nations eliminator.

His successor is local Ibrahim Kamara, who plans a pragmatic “counterattacking” system to stabilise the team and achieve results, starting in Rwanda this Sunday.