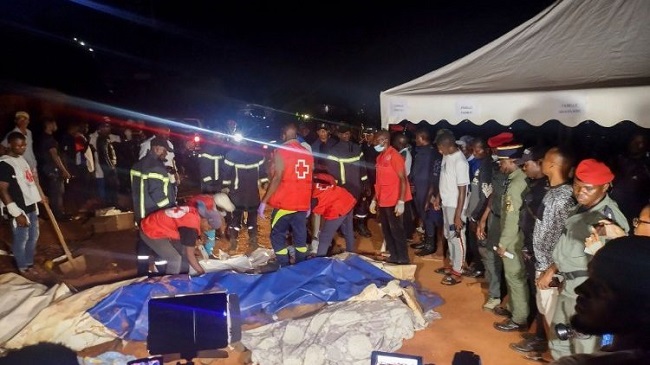 Rescue workers in Cameroon’s capital, Yaounde, are searching for people believed trapped under a landslide that killed at least 14 people and injured scores more Sunday. The victims were attending a funeral when the landslide occurred.

Civilians mourn as they join rescue workers in digging and searching for people they fear are trapped underneath a huge pile of debris.

The soil and stones collapsed Sunday evening on several hundred community members from Cameroon’s west region who had gathered for a funeral of people who died within the past month.

Rosette Ngeufack, 50, is among the mourners. She says she saw the ground collapse on scores of people including her two sons.Ngeufack says she is still searching for her 24-year-old son who was buried by the landslide alongside his motorcycle. She says she left the Yaounde central hospital at 2 a.m. after hospital staff reassured her that her 21-year-old son, also a victim of the landslide, is responding to treatment.

It is a tradition in Cameroon for communities to organize funeral events in towns after burial of their community members in villages.

People who attended the funeral prior to the landslide said they had prayed for the departed and were sharing drinks and food when the unfortunate incident occurred.

Nasseri Paul Bea, governor of Cameroon’s center region where Yaounde is located, visited the disaster site for the second time within 15 hours on Monday morning. He says that investigations carried out by Cameroon police indicate that some civilians are still trapped in the landslide.

Bea says he asked the government for more troops to assist rescue workers who for the past 14 hours have been searching for people. He says bodies removed from the disaster site are identified by the police and taken to the mortuary of the central hospital in Yaounde and then eventually to their family members.

Cameroon’s government says the landslide occurred when an 18-meter-high embankment collapsed on several hundred civilians attending a funeral in a house constructed in a risky area.

Bea said the embankment that gave way was not solid enough to stop the soil from collapsing.

Cameroon’s Housing Ministry Monday asked people living in areas deemed at risk of landslides to immediately to leave or be forced to relocate.

Yaounde, a city of about 3 million people, has had devastating floods caused by heavy rains within the past three months. The government says more than 25 houses constructed in risky areas have collapsed, injuring and killing scores of people.