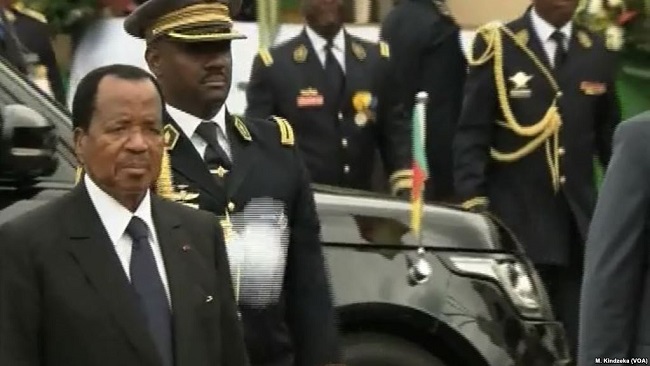 Cameroon’s opposition has again failed to present a single presidential candidate to challenge Paul Biya who has been in office for 36 years. Twenty-eight candidates will be contesting the country’s October 7 presidential election, which Biya is favored to win.

The youngest candidate registered to compete in the October 7 presidential election is journalist Cabral Libi. Just before the filing deadline, the 38-year old said he was still uncertain if he would run because he could not single handedly raise the $60,000 required by the election commission to run. He says he had to ask well wishers to help him.

He says he has demonstrated that he is the only candidate strong enough to challenge the incumbent president because he was able to raise over $ 60,000 from well wishers within three days to pay the caution fee required by Cameroon’s electoral laws for each presidential aspirant.

Libi is one of the 28 candidates to contest the poll. Two women: Ze Genevieve, an independent candidate and Habiba Issa who will run for the opposition UPC party, also registered to challenge the 86-year old Biya, who has been president for 36 years.

Last January, Cameroon’s notoriously fractured opposition attempted to unite behind a single candidate. About a dozen opposition parties were negotiating to back Akere Muna, a prominent lawyer who specializes in fighting corruption. Muna pledged a non-partisan platform, but today is running on the ticket of his Peoples Development Front political party.

Maurice Kamto, who was meeting with Muna and the main opposition political party the SDF to discuss the possibility of a single candidate, is today running for his Cameroon Renaissance Movement Party. Kamto says after discussing with some political parties, he found out that all of them wanted a single candidate, but felt they were the stronger politicians that other weaker parties should join.

He says he then decided that he, like other politicians who want to run for president should present to Cameroonians their programs and projects that they will implement if elected, instead of basing their strengths on the religious, tribal and ethnic groups they represent.

The SDF has chosen a 50-year old lawmaker, Joshua Osih, as their candidate and says it is sure Osih will perform better in the elections if the polls are transparent and fair.

The ruling CPDM party has gathered at least 30 of the divided opposition political parties to rally behind its candidate, Paul Biya. Issa Tchiroma, president of the Cameroon National Salvation Front, says the opposition’s inability to come up with a single candidate indicates how they are divided and so he will support Biya, who according to him is the only one that can bring peace and development to the troubled country.

“By declaring his candidature, this is an indication, clear indication that he sent to the nation and the world that he is the man of his generation. Mr president move forward, we are ready to support you,” said Tchiroma.

Cameroon is dealing with attacks by Boko Haram militants in the north, separatist movements in two English-speaking regions and a spillover of violence from the Central African Republic.

Biya has ruled Cameroon since 1982 and is Africa’s second longest serving president, after his neighbor Theodoro Obiang Nguema of Equatorial Guinea.

He is seen by many as favored to win the polls. If he does, he will rule the central African state up to 2025 when the next presidential election will take place.