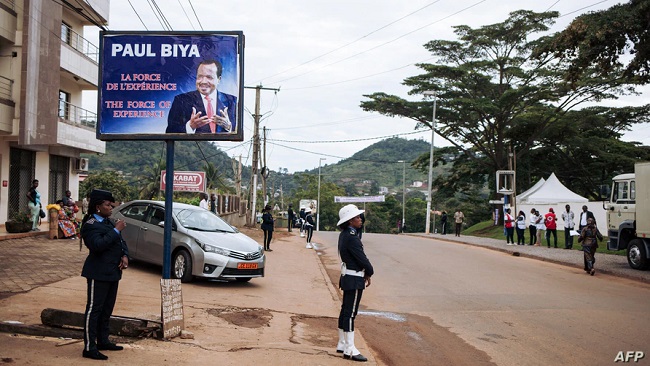 Yaoundé: Police Crack Down on Opposition 0

For the second consecutive time, heavily armed police dispersed an opposition leaders’ meeting held to propose reforms they say are needed to democratically change the more than four-decade-long rule of 88-year-old Cameroonian President Paul Biya. Opposition leaders, including three former presidential candidates, say the crackdown is the latest setback in their attempt to pave the way for peaceful transition of power from Africa’s second-longest-ruling president.

Seven opposition leaders said they were forcefully evicted from a meeting held in Yaounde Wednesday as they were pressing for reforms to rescue elections from the strong grip of Cameroon’s long-serving president, Paul Biya. The leaders issued a formal statement on April 3.

Among the attendees was Prince Michael Ngwese Ekosso. He is the president of the opposition United Socialist Democratic Party and said he took part in the meeting with hopes of easing tensions after allegations of election rigging. Opposition leaders say post-election tensions have risen after claims of fraud, with results skewed toward Biya’s Cameroon People’s Democratic Movement party.

“It was a need for us the political leaders to see that the electoral code resembles the aspirations of Cameroonians in general,” Ekosso said. “We are living a country where democracy is not implemented. They (the government) do not want political leaders to hold meetings and they (the police) always come to disrupt. And also, it was a need for us to be able to discuss those things that have hampered true democracy, and then talk about the need for opposition parties to be able to form a reasonable platform to address some of the key issues,” he added.

Ekosso said the leaders avoided possible brutality and assault by peacefully leaving the hall when the police ordered an immediate stop to the meeting.

The government said it ordered the meeting to be ended because the opposition leaders failed to obtain an authorization, as stipulated by Cameroonian law.

Ekosso said the law requires an authorization only when there is a political rally. He said he and his peers were simply taking part in a meeting of seven opposition leaders.

Three candidates who lost the country’s October 7, 2018, presidential poll were in the meeting.

Maurice Kamto, who claims he won the election and that Biya stole his victory, said the decision to stop an opposition meeting was another step in a crackdown on the democratic process.

Cabral Libii, a former presidential aspirant and lawmaker of the opposition Cameroonian Party for National Reconciliation, and Joshua Osih, former presidential candidate and vice president of the Social Democratic Front, said the decision to stop the meeting was an afront to democracy.

Cameroon’s Higher Education Minister under Bia, Jacques Fame Ndongo, says there is no need for changes in the electoral code now.

He said Cameroonians gave Biya 71% of their votes in the 2018 presidential election, an indication that they agree with all of Biya’s policies and laws. He said people are expecting Biya to concentrate on developing Cameroon in fulfilment of the promises he made before the 2018 presidential poll.

Ndongo said political parties can make suggestions as to the changes they want in the electoral code for Cameroon’s Parliament to examine when lawmakers deem it necessary.

Mamoun Njoya of the Cameroon Civil Society group, which advocates for good governance in the country, says any opposition bill to change the electoral code will be thrown out of Parliament by majority lawmakers controlled by Biya.

He said Biya and his Cameroon People’s Democratic Movement party have drifted from the policy and values they promised the Cameroon people when the party was founded in 1985. He said Biya and his party are not ready to enact laws that will stop election rigging and the siphoning state funds.

Biya has been in power in Cameroon for 45 years, seven as prime minister and 38 as president. In 2008, he removed term limits from the constitution, allowing him to serve indefinitely.

He has won all of Cameroon’s elections, but the opposition has always contested his victory, saying Biya prepared the electoral code to favor him and his CPDM party.

Biya is the second-oldest serving president in sub-Saharan Africa after his neighbor, Obiang Nguema of Equatorial Guinea, who has been in power since 1979. When Biya’s latest term is finished, he would be 93 years old.