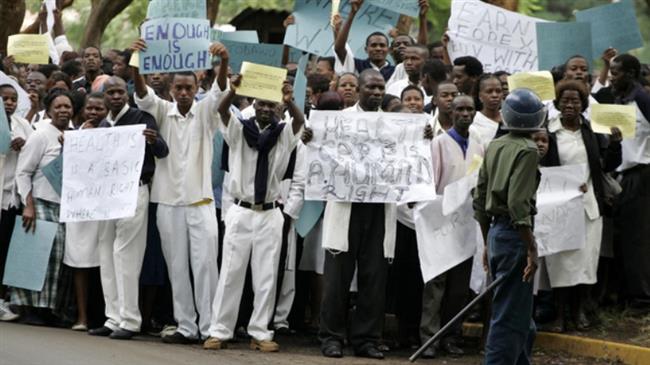 Zimbabwe has fired all nurses who went on strike to demand higher salaries, in a hardline response by the country’s new leadership to growing labor arrest.

Several thousand nurses were sacked in a terse statement issued on Tuesday evening by Vice President Constantino Chiwenga, who accused the strikers of being “politically motivated.”

Patients were turned away from major hospitals after the nurses began their industrial action on Monday, shortly after doctors ended their own weeks-long strike earlier in the month.

“Government has decided in the interest of patients and of saving lives to discharge all the striking nurses with immediate effect,” Chiwenga said in a statement.

He said unemployed and retired nurses would be hired to replace those fired.

Chiwenga was the military general who led the ousting of Robert Mugabe in November when the army briefly took control and ushered Emmerson Mnangagwa into the presidency.

Chiwenga described the nurses’ strike as “deplorable and reprehensible” as the government had released $17 million (14 million euros) to boost their pay and allowances.

He said the funds would now be used to employ new nurses.

Zimbabwe’s nurses association said they “noted” Chiwenga’s statement but added that they remained on strike.

“Government has done everything to comply with the demands of the striking nurses,” Mnangagwa said, according to state-owned media. “This leaves us with no option but to dismiss them.”

More than 90 percent of Zimbabwe’s budget is spent on government wages.

Teachers at public schools have threatened to go on strike if their pay is not increased.

Zimbabwe is due to hold elections in July or August, the first since the shock fall of Mugabe, who ruled since independence from Britain in 1980.

Mnangagwa, Mugabe’s former deputy, is a veteran loyalist in the ruling ZANU-PF party.