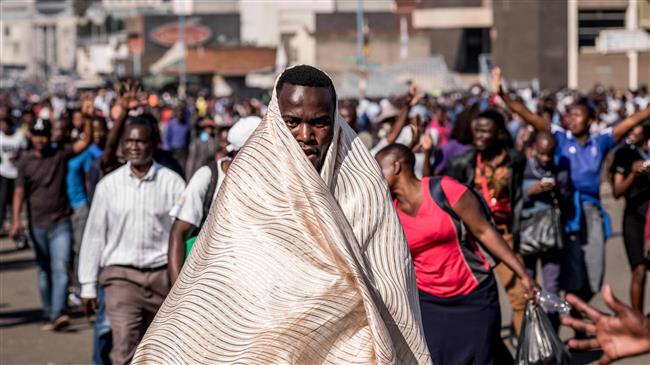 At least one person has been killed in Zimbabwe’s capital when security forces fired on opposition supporters protesting against what they say was electoral fraud.

Media reports said the protester was shot dead near a bus rank in Harare on Wednesday as soldiers stepped in to disperse stone-throwing supporters of the Movement for Democratic Change (MDC). Witnesses said the man was shot in the stomach and lay in a pool of his own blood that seeped onto the dusty tarmac.

Protesters are angry at a delay in announcing the results of the presidential election.

Dozens of soldiers fanned out across central Harare as armored personnel carriers with roof-mounted machine guns sped through the streets.

The opposition accuses President Emmerson Mnangagwa and his ruling ZANU-PF party of stalling so it can steal the landmark election.

It had been hoped that the first election following former President Robert Mugabe’s removal after a brief army takeover led by former army chief Constantino Chiwenga would turn the page for the country. “You said you were better than Mugabe, you are the picture of Mugabe,” shouted one young protester. “We need security for the people.”

United Nations Secretary-General Antonio Guterres has called on Zimbabwe’s political leaders and people “to exercise restraint and reject any form of violence while awaiting resolution of the disputes and announcement of the election results.”

“We are concerned about the reports that there have been incidences of violence in parts of Zimbabwe,” UN spokesman Farhan Haq said. “We’d like to remind the incumbents and the political parties of the commitments they made, the peace pledge and the code of conduct to ensure a peaceful electoral process.”

Millions of people voted peacefully in the Monday election, the first ever vote without Mugabe in almost 40 years in Zimbabwe.

Mugabe’s 37-year rule came to an end last November after the military took over the capital and the state broadcaster and held Mugabe and his wife under house arrest in a bloodless coup.