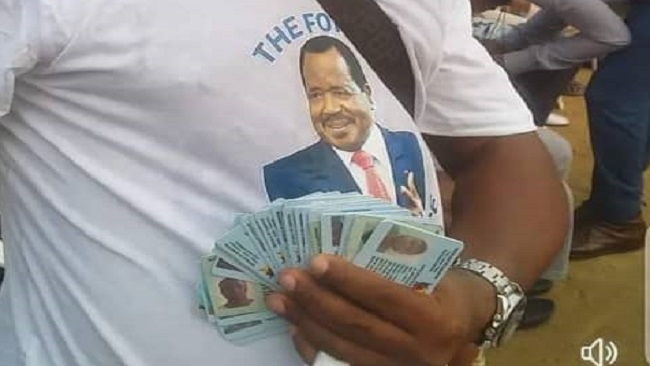 Vote counting in Cameroon’s local and parliamentary elections on Sunday has been marred by violence and opposition claims of fraud committed by the ruling party.  Opposition leaders accuse the ruling Cameroon People’s Democratic Movement of ballot stuffing, which it denies.

Opposition candidates and officials of Cameroon’s elections management body, ELECAM, argued at a polling station Monday in the southwestern town of Limbe.

As vote counting continued in Sunday’s local and parliamentary elections, some parts of Cameroon saw protests sparked by allegations of fraud.

“It is a shame.  The international community should see,” he said. “We caught one lady with about 500 CPDM ballot papers.  This is one case; the president of a polling station has stuffed the box.  Is it not a pity?”

Etoke alleged the CPDM also declared itself the winner in English-speaking villages where civilians fled fighting between the military and rebels, despite no one voting.

The government, however, acknowledged fraud allegations and election disputes in almost every town where the opposition fielded a candidate.

The governor of the French-speaking western region, Augustine Awa Fonka, says clashes in one village left one man dead and several wounded.

He would not identify the man or give details on how he was killed but, called for a return to peace.

“There is no point for people coming out, blocking the roads, quarreling, fighting,” he said.  “Violent acts here and there are unnecessary, so I am calling on the population to be calm, to be vigilant.  They should avoid provocations.  If you do not succeed today, it is not the end of the world.  You prepare for the next elections.  I think at this point in time, we badly need peace.”

The government deployed the military to English-speaking towns to protect voters from insurgents who had vowed to disrupt the polls.

But some villagers who talked to reporters accused the military of using the deployment to have troops cast multiple votes for the ruling party.

The minister of territorial administration, Paul Atanga Nji, rejected the claims.  He insists the polls were fair and successful, despite what he described as a few challenges.

“All went well in the 24,988 polling stations,” he said. “Any form of challenge to the verdict of the polls other than the constitutional legal means will not be tolerated,” he said.

The ruling CPDM party is calling on its supporters and all Cameroonians to wait calmly for official election results.