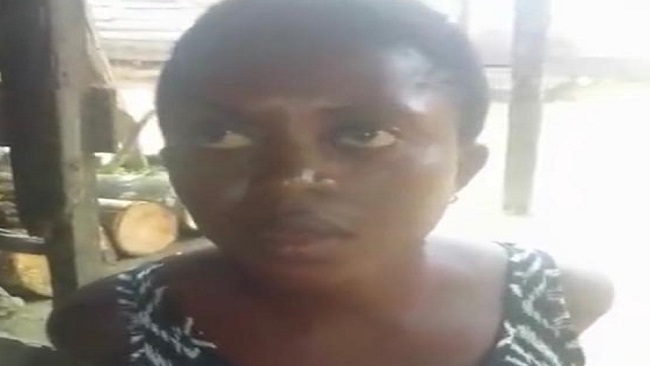 “Fine play,” a pidgin English expression for “well done.” That’s what an alleged separatist fighter can be heard saying as the throat of a woman is cut with a machete.

A screenshot of the video showing Confort Tumassang being interrogated and threatened by armed separatists before her killing, August 11, 2020, Muyuka, South-West region, Cameroon

A screenshot of the video showing Confort Tumassang being interrogated and threatened by armed separatists before her killing, August 11, 2020, Muyuka, South-West region, Cameroon   ©

In a shocking video widely circulated on social media, three suspected separatist fighters in Muyuka, South-West region, beat and drag a 35-year-old woman, identified as Confort Tumassang by the government, over the ground with her hands tied behind her back on August 11. She begs for mercy before she is beheaded, her body left in the street. The mother-of-four is just the latest casualty in brutal attacks against civilians committed by separatist groups across the North-West and South-West regions of Cameroon – some of them similarly captured on video.

Human Rights Watch also reviewed a second video, filmed before the killing, showing separatists interrogating and threatening Tumassang, whom they accused of collaborating with the military.

The Minister of Communication issued a statement on August 13 condemning the murder and calling on security forces to ensure civilians’ protection.

The video, which corroborates previous accounts of killings by armed separatists documented by Human Rights Watch since late 2016, emerged as a new spike of violence affects civilians across the Anglophone regions.

“It flies in the face of humanity for us to accept these abuses as the new normal. There must be accountability,” the prominent human rights activist Felix Agbor Nkongho, also known as Agbor-Balla, told Human Rights Watch this week.

Yet when Human Rights Watch contacted the three main Anglophone separatist groups – the Ambazonia Governing Council, the Interim Government, led by Sisiku Julius Ayuk Tabe, and its splinter faction, led by Samuel Ikome Sako – for their reaction to the video, they condemned the killing but denied responsibility. Some blamed each other, while others accused government soldiers of disguising themselves as separatist fighters to commit atrocities – an accusation which the Minister of Communication dismissed.

Separatists continue to commit serious human rights abuses in the Anglophone regions with near-total impunity. Their leaders should immediately end the violence against civilians, and Cameroon’s international partners and the United Nations Security Council should impose targeted sanctions on separatist leaders responsible for these abuses.