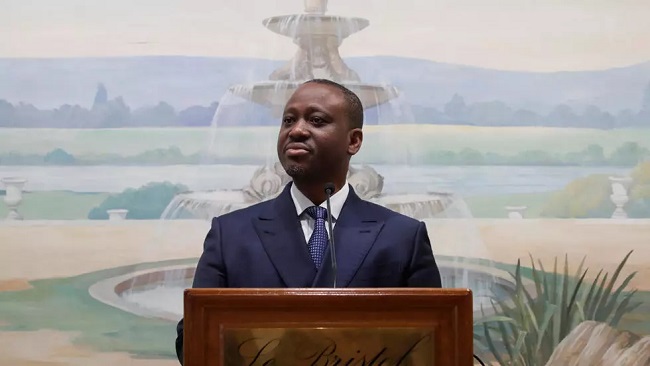 Ivory Coast ex-rebel leader and former premier Guillaume Soro, whose bid for the presidency has been invalidated by a court, insisted Thursday his candidacy was “irrevocable” even as he attacked the October 31 elections as a scheme to enshrine 78-year-old Alassane Ouattara as head of state.

“My candidacy is firm, unchangeable and irrevocable,” Soro told journalists in Paris, adding his country was “on the brink” since President Alassane Ouattara’s decision to seek a third term in office.

Soro urged the country’s opposition parties to unite against Ouattara even as he insisted that the October 31 presidential poll “does not make any sense” as it was designed to “endorse the institutional state coup d’etat of Alassane Ouattara”.

Soro, who served as prime minister from 2007 to 2012, urged Ivory Coast opposition leaders to unite and to “seize (regional bloc) ECOWAS in order to obtain transparent elections”.

And he insisted that on October 31, “there will be no election”, without further explanation.

On Tuesday the African Court on Human and Peoples’ Rights called on the Ivorian authorities to allow Soro to contest the vote.

Tensions are running high ahead of the poll in the West African state where more than 3,000 people died in post-election violence in 2010-11.

This week, protests broke out in several cities including in southeastern Bonoua, the hometown of Gbagbo’s wife Simone, where about 300 people, mainly youngsters, marched against Ouattara’s candidacy in defiance of a ban on demonstrations.

Ouattara had said in March that he would not seek a third term but made a U-turn just four months later when his preferred successor, prime minister Amadou Gon Coulibaly, died of a heart attack.

The argument behind his bid pivots on modifications to the constitution in 2016. Supporters say this has reset the two-term limits to zero, entitling him to run again.

Violent protests against Ouattara’s candidacy left around 15 dead last month, reviving memories of the post-election bloodshed nearly a decade ago.