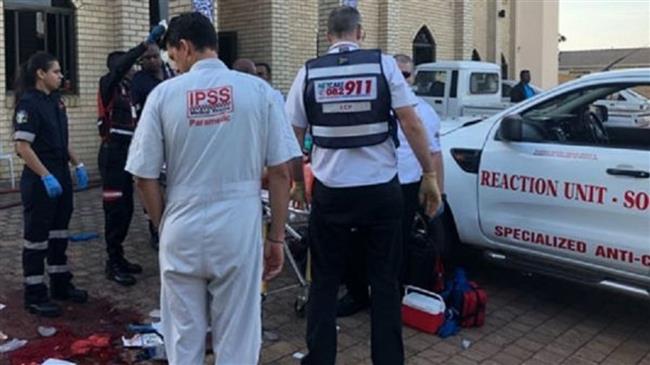 Three men armed with guns and knives slit the throats of three worshipers at a mosque near Durban in South Africa and a person was killed, an emergency service official said on Thursday.

One victim jumped from a side window of the building, which had been set ablaze sending smoke billowing, said Prem Balram, a spokesman for Reaction Unit SA, a private emergency service, who was among the first on the scene.

“One of the three has just died on his way to hospital. The other two are in critical condition,” said Balram, adding that the suspects fled in a white car. “The suspects were Egyptian males. The local people here identified them.”

South African police said the motive of the attack at a mosque on the Old Main Road in Ottawa in the KwaZulu-Natal province was unknown and they were investigating.

Africa’s most industrialized country has a large expatriate community and attracts many tourists but has seldom been associated with Takfiri militancy.

Balram said police had cordoned off the scene of the attack.

“There is a knife that was recovered at the scene, we believe the knife is suspected to have been used in the crime,” the KwaZulu-Natal police spokeswoman Captain Nqobile Ngwala said at the scene.

Police said in a statement that three unknown men entered a mosque after the midday prayer and attacked three people.

The suspects also set certain rooms in the mosque alight before fleeing in their getaway vehicle, police said.

“The motive of the attack on the three men is unknown at this stage,” police said, adding that no arrests have been made.