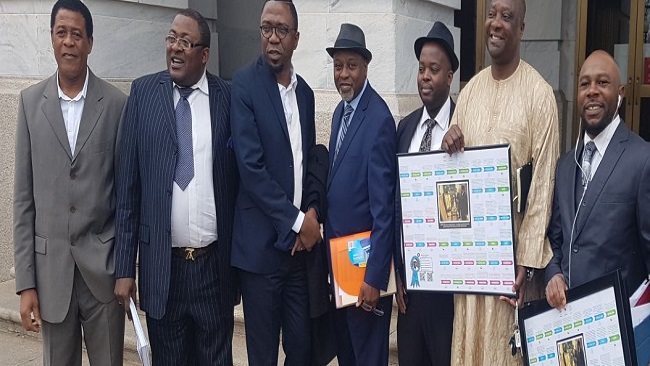 Claims of responsibility for attacks by the ADF of Cho Ayaba were once seen as credible at the very beginning of the Southern Cameroons crisis, but after the revelations by the Lebialem Dragons and the disclaimer that came from Amba fighters in Batibo including the recent communiqué made public  by the Ambazonia Recognition and Collaborative Council, ARCC stating that it lobbied the US Congress into accepting a hearing on the Ambazonian crisis, Cameroon Intelligence Report experts are now stressing that the Cho Ayaba and Boh Herbert gang are increasingly spreading fake news.

In a document dated Saturday the 19th of May 2018, the ARCC announced to Southern Cameroonians that it had gotten the US Congress to hold a discussion on the crisis situation in Southern Cameroons and presented evidence of the atrocities being committed by French Cameroun forces. While Southern Cameroonians are still scrambling to understand the motive for the creation of the so-called Ambazonia Recognition and Collaborative Council, our correspondent in Washington has so far found no connection between the US Congress and the Ambazonian Recognition and Collaborative Council.

“The Ambazonian Recognition and Collaborative Council have made a number of demonstrably false claims of diplomatic push and incidents that had no traces of the group’s DNA,” our US bureau chief said. We understand the members of the ARCC face defeat on the prominent positions they once held in the beginning of the struggle and they are now seeking to generate publicity to show they are still a force.

A senior Southern Cameroonian citizen who contributed to our investigation opined that “The Ambazonian Recognition and Collaborative Council are desperate for attention and will claim just about anything these days knowing that the war has push Ambazonians into believing everything.”  The group is claiming every breakthrough by the Interim Government in order to maintain a presence in the Southern Cameroons struggle.

We can now reveal that the Interim Government of the Federal Republic of Ambazonia with the support of Prof. Patrice Nganang was ultimately responsible for the decision made by the US Congress.  The resolution is yet to be brought to the floor of the Congress for debate and it is mainly on the arrest of Patrice Nganang and the hundreds of Anglophones in French Cameroun detention centers.  The IG members accompanied by the much respected US-based French Cameroun University don who was recently detained in Cameroon presented both situations to US Congressmen and took a family photo which we have attached to this report. 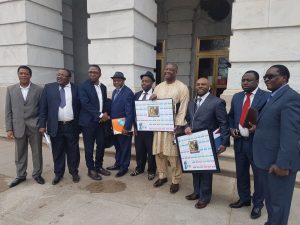 The members of the Ambazonian Recognition and Collaborative Council were seemingly inspired to produce the said press release from leakages on social media but without necessarily having been in contact with the IG.  The statement by the Ambazonian Recognition and Collaborative Council published below has no substance, no photo or any mention of Congressmen they met to substantiate their claim.

Below is the ARCC Statement

WASHINGTON, DC, 19 MAY 2018 – The Congress of the United States of America will hold a hearing on the genocidal violence unfolding in the former British United Nations Trusteeship Territory of Southern Cameroons which was renamed Republic of Ambazonia on “Restoration of Independence Day” – 1st October 2017.

A date will be announced in the coming weeks for the hearing expected to touch on other hot topics such as the fight against Boko Haram, rights violations and upcoming elections.

This is the main outcome can be reported at the end of several weeks of aggressive diplomatic outreach by the Ambazonia Recognition Collaborative Council (ARCC).

On Friday, 18 May 2018, ARCC delegates met all day on Capital Hill with the congressional staff of several U.S. senators and representatives, as well as with staffers from the House Sub­Committee on Africa and the U.S. Department of State.

Along with a detailed report which highlights rights violations and targeted killings by the colonial Republic of Cameroon in Ambazonia, ARCC made oral presentations and submitted a petition Friday to several key members of the Congress of the United States, calling on the Congress, the People and Government of the USA to, among others:

ARCC used the outing to Capitol Hill to reiterate the following solemn reminders:

At all meetings on Friday, the ARCC delegation invited the U.S. Congress to speak up boldly in defense of the Second Amendment of the American Constitution on the right of the people to keep and bear arms. The delegation argued that the legality and constitutionality of the principle apply not only to Americans but also to Ambazonians who seek to “maintain a status of independence” by defeating attempts by Cameroon, France and others to take away their freedom and independence.

Mrs. Jennifer Ngeniform T., ARCC Chair Dr. Cho Ayaba, Chair, AGC Ntumfoyn Boh Herbert, MoRISC Mr. Edwin Ngang, Representative, APERM
To close a full day of activism on Capitol Hill, ARCC delegates assembled on the third floor of the Senate Russell Building to be photographed (in a group picture) mingling in the midst of an exhibit of bird and animal species that are in danger of extinction. The Ambazonians declared themselves a part of the exhibit, using their picture to highlight the new reality of all citizens of Ambazonia, who have become an endangered specie under colonial domination by Cameroon.