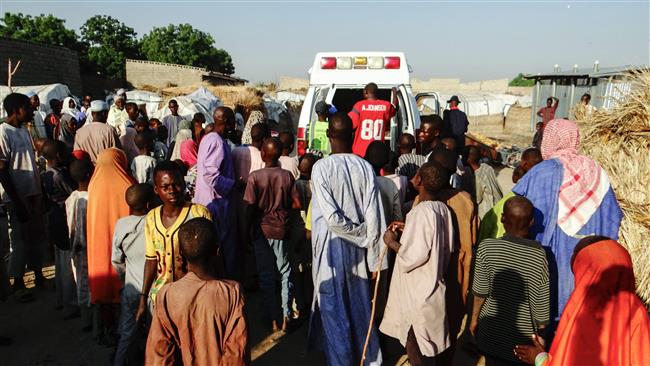 Twelve people have been killed and 48 others wounded in an attack by suspected Boko Haram bombers on Nigeria’s northeastern city of Maiduguri.

Officials from the State Emergency Management Agency (SEMA) for Borno said two assailants struck a market in the Muna Garage area in the vicinity of Maiduguri, the capital of Borno State, on Wednesday afternoon.

Muna Garage, the site of a camp for displaced people, is a frequent target of Boko Haram attacks.

Witnesses reported that parts of the market were still ablaze in the wake of the assault.

More than 20,000 people have been killed since Boko Haram started its deadly campaign in northeast Nigeria in 2009. The violence has claimed many lives in neighboring countries of Chad, Niger, and Cameroon as well.

On January 8, at least 20 loggers were killed near Maiduguri after Boko Haram Takfiri terrorists opened fire on them.

On Monday, a Boko Haram faction released a video purporting to show some of the girls abducted from a school in the town of Chibok in 2014, as well as a downed Nigerian helicopter and a group of policewomen captured last year.