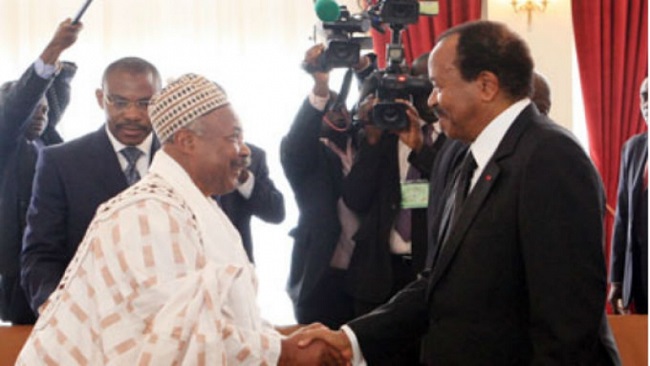 Achidi Achu: Will he still support the CPDM? (Video) 0

The home of former Prime Minister, Simon Achidi Achu, has been burnt and his son shot, then roasted in the northwest regional capital of Bemenda.

The incident happened on Friday, January 24, 2020, as government efforts to roll back separatist attacks have intensified since the beginning of this year.

Mr. Achidi Achu is a staunch member of the ruling CPDM and one of the architects of the strategy the government is using in its efforts to oppress the people of Southern Cameroons.

The results of the elections are already known, and the ruling CPDM will emerge as the winner on February 9, 2020, but the government is desperate to prove to the international community that its victory has came after free and fair elections.

Many Southern Cameroonians have been killed by trigger-happy government forces over the last three years, and Mr. Achidi Achu, considered as a major voice in the country, has never condemned the violent method the government has been employing to fighter restoration forces, most of whom live in the jungle.

With this incident, many are asking if Mr. Achidi Achu will still go about his business as if nothing has actually happened?

Many are also asking if he will still militate in a party whose method of dealing with descent has been condemned by the international community.

Speaking to a senior civil servant in Yaounde who elected anonymity, it was clear that many government officials are not in accord with what government forces are doing in the two English-speaking regions of the country.

The source said the situation was really unfortunate, adding that after all the killing and burning of homes, will it still be possible for Southern Cameroonians to feel at home in a country wherein the only way of addressing issues is by using military force?

“How can we continue to think that Cameroon is one and indivisible when we see such pictures?,” he quipped.

He said he would be very disappointed if something was not done to end this barbaric actions still used by the government.

“Will Mr. Achidi Achu still continue to be part of this party, which many consider as a crime syndicate?,” he asked.

The knife is turning inwards, he said, adding that this is an opportunity for Mr. Achidi Achu to petition the government for these criminal operations to be suspended.

“If innocent people are being killed and senior government officials are not safe, who then can really trust this government,” he asked.

“If so many people are being rendered homeless because their homes have been burnt, how will these same people vote on election day when their national identity cards and voters’ cards have been lost in the fire set by government forces?,” he quipped.

He urged the international community to intervene forthwith, adding that at this level no government policies can address this unfortunate situation that has been going on for three years.

He regretted having being part of a country wherein dialogue never exists when people disagree.

By Joachim Arrey in Canada